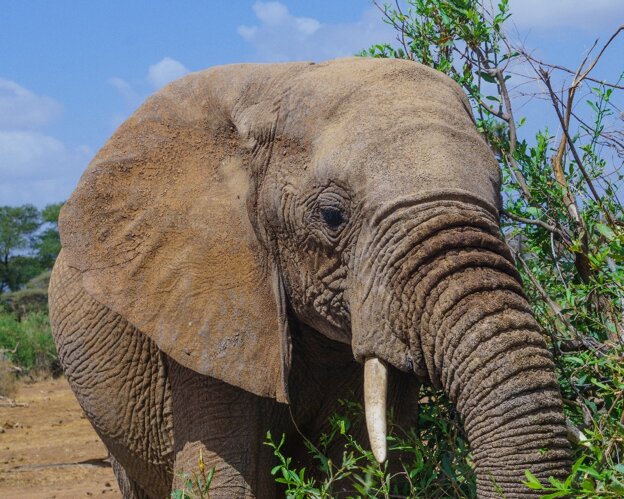 Wild African elephants, known for their intelligence, show markedly different movements and reactions to the same risks and resources. A new study led by Colorado State University and Save the Elephants reveals the magnitude and complexity of this variation in behavior and how it occurs in space and time, and among individual animals.

The findings, published in the September issue of Ecology Letters, indicate how elephants employ a diverse array of strategies that they adjust based on ecological changes. In particular, poaching causes elephants to switch their movements. The study results indicate that landscape conservation efforts should consider the needs of the different tactics elephants display.

The research team used GPS tracking data from more than 150 individual elephants followed over 17 years in the Samburu and Buffalo Springs National Reserve in northern Kenya as part of Save the Elephants’ long-term monitoring project. The scientists evaluated individual behavior of elephants to identify how each animal used various food and water resources. They then developed new analytical approaches to understand what drives variations among individual elephant behaviors.

The authors found that many elephants were targeting a specific resource, while others were avoiding that same resource—an unintuitive result, given that movement of most species is driven by the same factors of food, security and social interactions. The variation in elephant behaviors was stronger during the resource-limited dry season, compared with the resource-rich wet season, suggesting a key driver of the different movement strategies was avoidance of competition with other elephants.

“The extent and complexity of the variation among individuals was greater than we anticipated and demonstrated much more diversity than that found in other species,” said Guillaume Bastille-Rousseau, a post-doctoral fellow at CSU and lead author of the study.

George Wittemyer, an associate professor of fish, wildlife and conservation biology at CSU and co-author of the study, noted that elephants are hyper-social, with social interactions structuring everything in their lives, including their movements and space use.

“The results from this study bring new light to elephants’ individuality, where even when using the same location and facing the same constraints, elephants do not conform to a single behavior,” said Wittemyer, who also serves as the chairman of the scientific board of Save the Elephants. “We found this individuality was most clear in the manner by which elephants interact with humans, with some more willing to take risks than others.”

Bastille-Rousseau said the team was amazed to see that the elephants shifted their tactics over time, apparently adjusting their strategies relative to changes in the landscape.

“The next step for our research will be to try to understand if individuals displaying a given tactic are more successful than individuals using a different tactic,” he said.

Humans ‘must be better neighbours’ to save elephants