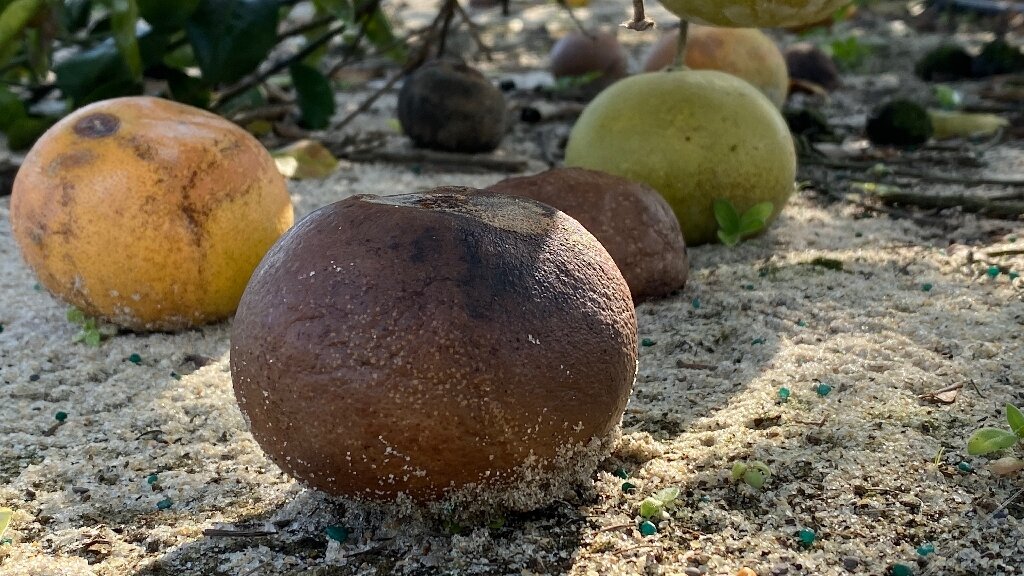 Peter Spyke has two types of oranges in his groves: those that are the color orange—and those that are green, unsaleable and responsible for the collapse of Florida’s orange crop over the past 15 years.

Florida farmers have observed, almost powerless, the spread of the huanglongbing bacterium (“yellow dragon disease” in Chinese), known worldwide as “HLB” and native to China. It was first reported in Florida in 2005, and has been conquering groves ever since.

The bacterium causes one of the most devastating citrus diseases called “greening”: the leaves of the infected trees turn pale, the fruit fails to ripen and remain green, and eventually fall to the ground.

The bacterium is transmitted by a small insect called citrus psyllid.

Compared to the 2003-2004 season, Florida’s orange production will be down by 80 percent this season (harvests last from November to April depending on the citrus variety). Grapefruits are the most affected.

“At this point we haven’t identified any way to make the trees immune to HLB,” he said during a tour of his orchard.

Florida citrus farmers have generally been reluctant to destroy contaminated trees, and as a result 90 percent of their groves are infected—compared to only 19 percent in Brazil, while Europe so far has been spared the blight. Sprays used to treat trees in Florida have been ineffective.

Spyke is taking a long-term approach to the problem by searching for citrus varieties that are naturally more resistant to HLB. On his 30-acre farm he has planted two dozen varieties of citrus including lemons, oranges, mandarins and grapefruit.

The 68-year-old farmer knows it will take years, but is resigned to the idea that there is no miracle solution. He has also changed the way he looks after the trees.

“We have to use appropriate cultural practices that will help it deal with the disease,” he told AFP.

One solution is to feed the plants “slow release” fertilizer, so that the nutrient supply is regular and continuous.

This apparently helps some trees fight against the effects of HLB, which literally “starves” them to death.

This is one of the recommendations given by a research laboratory that focuses on citrus just a 10-minute drive from Spyke’s farm.

GMOs to the rescue?

“Everyone really wants to see a deadline for solving that, unfortunately we scientists don’t have it,” Ferrarezi said.

“What’s very important to say is that—after 15 years handling this disease in Florida, we did acquire a lot of knowledge that can allow us to manage the groves in a way better way.”

The laboratory, under pressure from the industry and based on their research, has made available new varieties of oranges and mandarins that can produce more fruit despite the bacteria.

The lab has even suggested a simple and effective but expensive solution: covering the citrus trees with huge protective nets that block HLB-carrying insects, called Citrus Under Protective Screen or CUPS.

In an industry already suffering from a downturn, the question of dollars often comes up, as was the case at a late November meeting organized by the state.

Researchers are hard at work searching for a genetically modified alternative, but these mutant oranges are far from being ready to be planted.