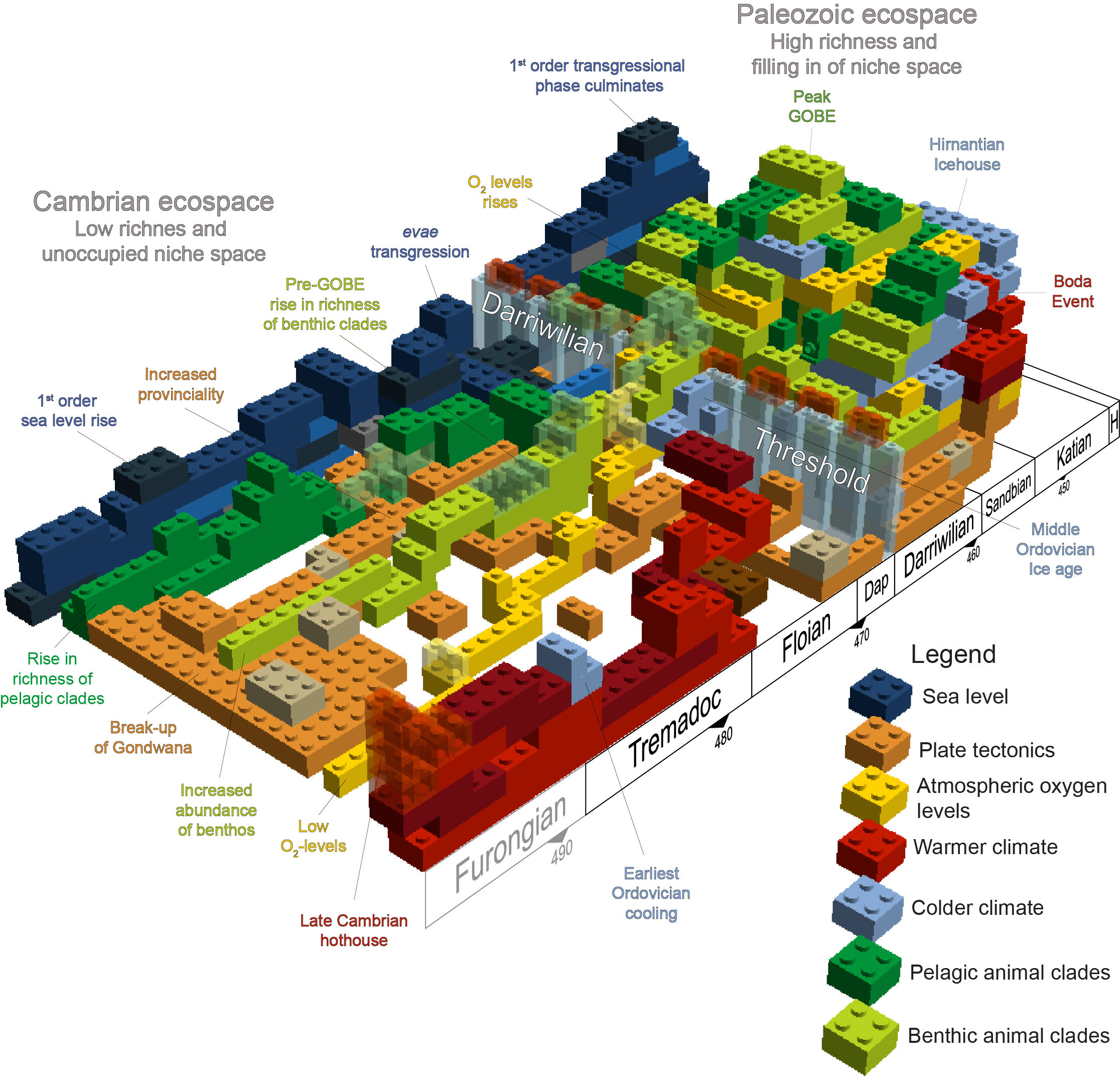 When Earth’s species were rapidly diversifying nearly 500 million years ago, that evolution was driven by complex factors including global cooling, more oxygen in the atmosphere, and more nutrients in the oceans. But it took a combination of many global environmental and tectonic changes occurring simultaneously and combining like building blocks to produce rapid diversification into new species, according to a new study by Dr. Alycia Stigall, Professor of Geological Sciences at Ohio University.

She and fellow researchers have narrowed in a specific time during an era known as the Ordovician Radiation, showing that new species actually developed rapidly during a much shorter time frame than previously thought. The Great Biodiversification Event where many new species developed, they argue, happened during the Darriwilian Stage about 465 million years ago. Their research, “Coordinated biotic and abiotic change during the Great Ordovician Biodiversification Event: Darriwilian assembly of early Paleozoic building blocks,” was published in Palaeogeography, Palaeoclimatology, Palaeoecology as part of a special issue they are editing on the Great Ordovician Biodiversification Event.

New datasets have allowed them to show that what previously looked like species development widespread over time and geography was actually a diversification pulse.Picture a world before the continents as we know them, when most of the land mass was south of the equator, with only small continents and islands in the vast oceans above the tropics. Then picture ice caps forming over the southern pole. As the ice caps form, the ocean recedes and local, isolated environments form around islands and in seas perched atop continents. In those shallow marine environments, new species develop.

Then picture the ice caps melting and the oceans rising again, with those new species riding the waves of global diversification to populate new regions. The cycle then repeats producing waves of new species and new dispersals.

Lighting the Spark of Diversification

The early evolution of animal life on Earth is a complex and fascinating subject. The Cambrian Explosion (between about 540 to 510 million years ago) produced a stunning array of body plans, but very few separate species of each, notes Stigall. But nearly 40 million years later, during the Ordovician Period, this situation changed, with a rapid radiation of species and genera during the Great Ordovician Biodiversification Event.

A recent review paper by Stigall and an international team of collaborators attempts to provide clarity on these issues. For this study, Stigall teamed up with Cole Edwards (Appalachian State University), a sedimentary geochemist, and fellow paleontologists Christian Mac Ørum Rasmussen (University of Copenhagen) and Rebecca Freeman (University of Kentucky) to analyze how changes to the physical earth system during the Ordovician could have promoted this rapid increase in diversity.

In their paper, Stigall and colleagues demonstrate that the main pulse of diversification during the GOBE is temporally restricted and occurred in the Middle Ordovician Darriwilian Stage (about 465 million years ago). Many changes to the physical earth system, including oceanic cooling, increased nutrient availability, and increased atmospheric oxygen accumulate in the interval leading up to the Darriwilian.

These physical changes were necessary building blocks, but on their own were not enough to light the spark of diversification.

The missing ingredient was a method to alternately connect and isolate populations of species through cycles of vicariance and dispersal. That spark finally occurs in the Darriwilian Stage when ice caps form over the south pole of the Ordovician Earth. The waxing and waning of these ice sheets caused sea level to rise and fall (similar to the Pleistocene), which provided the alternate connection and disconnection needed to facilitate rapid diversity accumulation.

Stigall and her collaborators compared this to the assembly of building blocks required to pass a threshold.