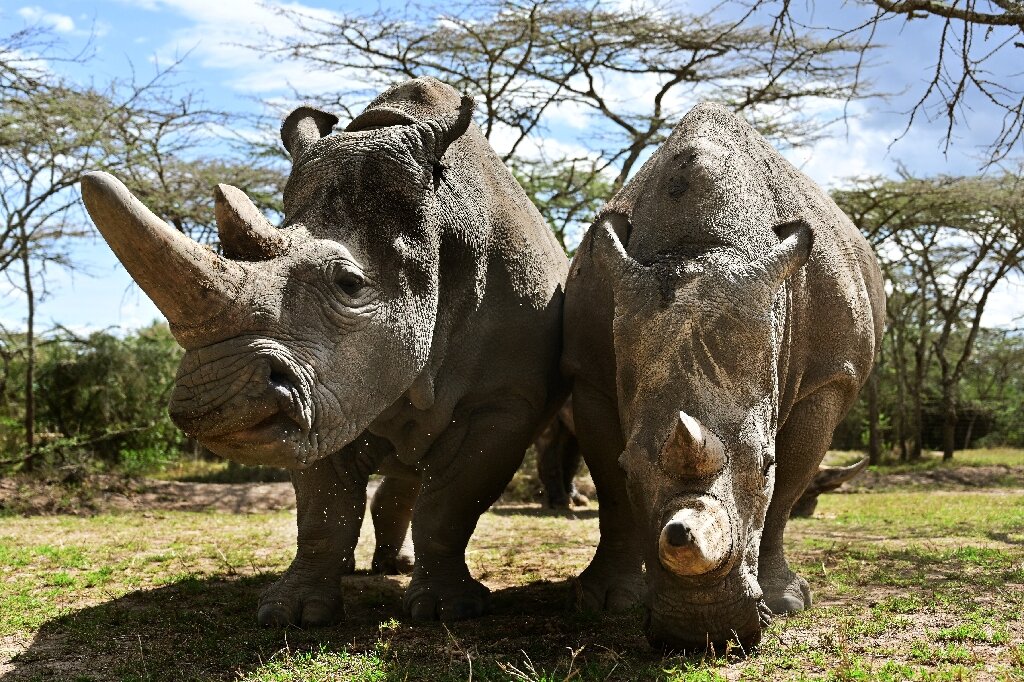 Veterinarians have successfully harvested eggs from the last two surviving northern white rhinos, taking them one step closer to bringing the species back from the brink of extinction, scientists said in Kenya on Friday.

Science is the only hope for the northern white rhino after the death last year of the last male, named Sudan, at the Ol Pejeta Conservancy in Kenya where the groundbreaking procedure was carried out Thursday.

Two females, Najin, 30, and daughter Fatu, 19, are the only survivors of the subspecies of white rhino, and live under 24-hour armed guard at Ol Pejeta.

However neither is able to carry a calf. Fatu has degenerative lesions in her uterus and Najin has weak hind legs which could cause complications if she fell pregnant.

But an international consortium of scientists and conservationists has been working on a project costing several million euros to save the northern white rhino using pioneering artificial reproduction techniques that have taken years of research and development.

“We were able to harvest a total of 10 oocytes—five from Najin and five from Fatu—showing that both females can still provide eggs and thus help to save these magnificent creatures,” said Professor Thomas Hildebrandt from the Leibniz Institute for Zoo & Wildlife Research (IZW) in Germany who helped carry out the procedure.

“Both the technique and the equipment had to be developed entirely from scratch,” he said.

The eggs—which cannot be frozen—were immediately flown to a laboratory in Italy to be fertilised with cryogenically frozen sperm, of which there are samples from four deceased males.

The resulting embryos will then be frozen until they can be transferred into a surrogate mother from the southern white rhino subspecies. The first such rhino embryos using in-vitro techniques were created last year.

“We are delighted that this partnership gets us one step closer to prevent extinction of the northern white rhinos. This is particularly touching given the heartbreaking death of Sudan, the last male, who died of old age last year in Kenya,” said John Waweru, KWS director general.

Sudan gained worldwide fame in 2017 after he was featured on the popular dating app Tinder in an effort to raise money for the IVF procedure.

Wiped out by poaching

There are five rhino species remaining on earth of which black and white rhinos are found in Africa. The northern white rhino is generally considered a subspecies of white rhino although some scientists believe it to be a sixth species.

Rhinos have few predators in the wild due to their size.

However, demand for rhino horn in traditional Chinese medicine and dagger handles in Yemen fuelled a poaching crisis in the 1970s and 1980s that largely wiped out the northern white rhino population in Uganda, the Central African Republic, Sudan and Chad.

By 2008 the northern white rhino was considered extinct in the wild.

Modern rhinos have plodded the earth for 26 million years. As recently as the mid-19th century there were more than one million in Africa. The western black rhino was declared extinct in 2011.

If the IVF is successful, scientists say there may be several births of northern white rhino calves, but the approach has its limits.

Eggs can only be collected from the females three times a year, and a lack of genetic diversity could hamper the survival of the species.

However the consortium of international scientists known as BioRescue is also trying to create artificial sex cells known as gametes via stem cell transformation from the frozen tissue of other, unrelated northern white rhinos, to diversify the gene pool.

According to the team working on the project, the aim is to reintroduce the rhino into secure habitats within the areas they used to roam. This could take up to 70 years.

Scientists fine-tune method to save rhinos