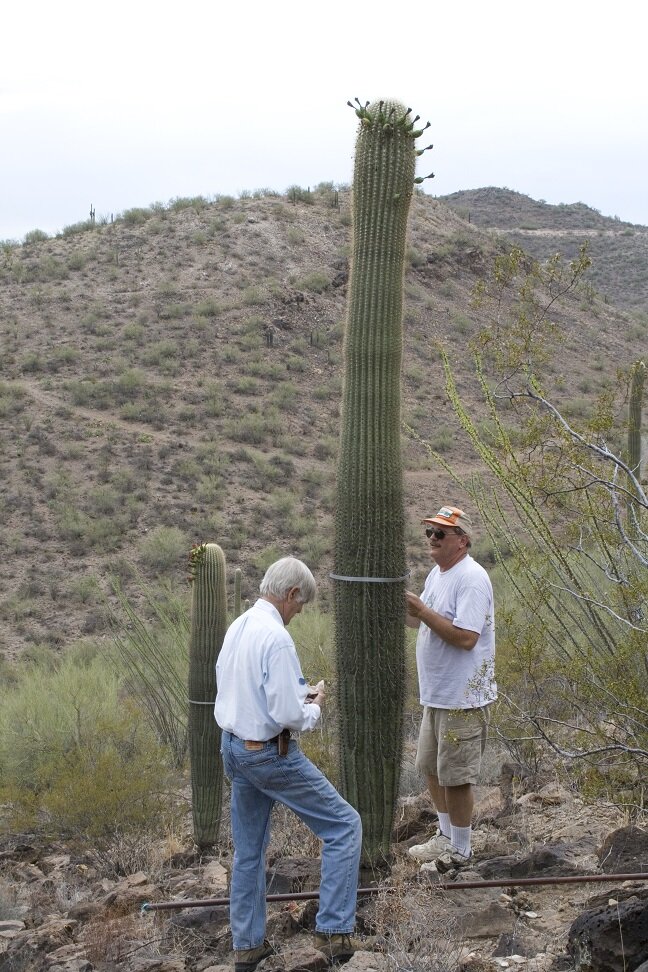 The iconic saguaros on Tumamoc Hill served as harbingers in new research which sought to predict how the desert species will fare in the hotter, drier climate of the future and how topography might mitigate the effects of climate change.

Lead author Susana Rodríguez-Buriticá and her team crunched the numbers in a 48-year-long dataset that included information on more than 5,800 saguaros dotting the Desert Laboratory on Tumamoc Hill, an 860-acre ecological reserve owned and operated by the University of Arizona College of Science in partnership with Pima County. They found that small variations in the hill’s topography might buffer saguaro populations from the impacts of a harsher climate.

“This was an ambitious but highly valuable undertaking, since these plants can live for over 100 years,” said co-author and United States Geological Survey research ecologist Daniel Winkler. “As a result of the long-term data set, we’re able to identify how saguaro populations have been maintained over time and predict how they’ll likely respond to future climate change.”

Previous studies have attributed changes in saguaro populations to climate. This new study, published in the journal Ecosphere in August, confirmed more saguaro growth and establishment during wet periods, and alternatively, death and reduced establishment during drought and extreme freezes.

“Ignoring spatial and temporal variability and their interactions can produce incorrect predictions when trying to model species’ past and future population dynamics,” said Rodríguez-Buriticá, who was a postdoctoral research fellow at the University of Arizona from 2011 to 2014 when she conducted this research. She is currently the lead researcher in the Spatial Ecology Lab at Alexander von Humboldt Biological Resources Research Institute in Colombia.

Specifically, the team found that Tumamoc Hill’s saguaro population boomed during wet and cool periods, but that topographic variability interacts with climate fluctuations to produce unexpected demographic patterns, including the ability to foster new saguaros during periods of harsh climate conditions.

For example, saguaros are traditionally favored on south- and east-facing slopes in the winter, when saguaros are most at risk of dying by frost, because that’s where the sun lingers longest, according to Rodríguez-Buriticá. But this is not strictly the case on Tumamoc Hill. The south and east slopes are steep and rocky, meaning water retention is too low for many saguaros to take hold. Alternatively, the north-facing slopes, which are less-steep, receive less sunlight but have deeper, richer soil that retains water for saguaros. As a result, saguaros could establish there too, even in years when the desert is hotter and drier than normal.

The team chose to study saguaros on Tumamoc Hill because of the diversity of slopes and elevations, and because of the rich history of long-term research there, said co-author Larry Venable, UA professor of ecology and evolutionary biology and director of research for the Desert Laboratory at Tumamoc Hill.

“The Desert Laboratory at Tumamoc Hill has the longest record of population dynamics of saguaros,” Venable said. “It’s special because the Carnegie Institution founded it in 1903, and it has hosted leading ecologists since the early 20th century. There’s a deep history of data collection. This research is more valuable because of the long-term nature of the data.”

Existing population data spanned from 1964 to 1993 until Rodríguez-Buriticá and her team extended it to 2012. This is important because a lot has changed since 1993, Venable said, such as climate change and the invasion of buffelgrass.

Rodríguez-Buriticá is polishing her next paper, which will explore the importance of microtopography and plant-to-plant interactions to buffer extreme climate in saguaro populations. She believes that her team’s work illustrates the power of long-running datasets to study how climate impacts species.