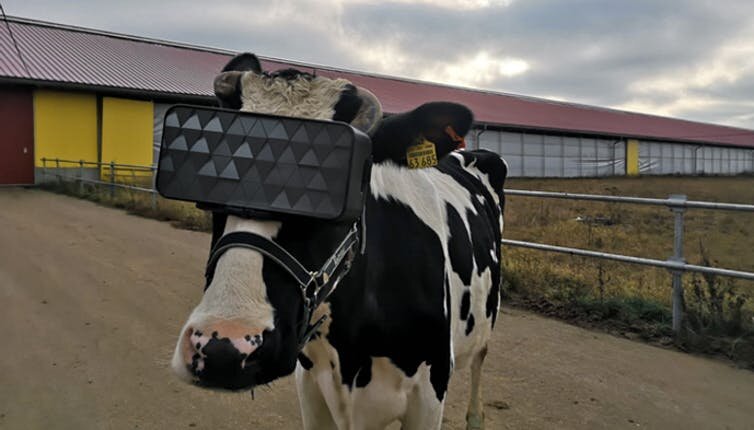 Conducted at the RusMoloko farm near Moscow, the trials supposedly use specially adapted goggles to show the animals a view of a pleasant field in summer. The idea is to make the cows happier, which in turn could make them produce more milk.

Some have doubts over whether the tests are real, and it wouldn’t be the first time pictures of animals in VR headsets have been used to capture public attention. Similar images of CatVR and “virtual free range” chickens have appeared in the past.

But to take the idea seriously, at least for a moment: can animals perceive virtual reality the same way we do? And would it do them any good?

Unfortunately for the emerging VR industry, there is little to suggest that gazing on a virtual landscape will make cattle happier.

Visual stimulation may be beneficial to some species of animals, but the research relates mostly to primates. Horses in a stable do seem to benefit from a view of other horses and an open window. But the sounds, smells, breeze and associated temperature changes in the real world make for a far richer sensory experience than VR can offer.

Could virtual reality for animals ever be a good idea? Cognition researchers working with chimpanzees have given the animals access to a virtual maze environment to study their spatial cognition abilities.

In this research the chimps were given food rewards when they successfully located objects in the maze. There’s no evidence they enjoyed the VR experience for its own sake. And the chimps didn’t wear VR headsets; the virtual world was displayed on a computer screen and the animals navigated using a joystick.

A visual VR experience might be appealing to humans, but would likely have less inherent value for animals. Humans can understand symbolic imagery, complex language-based events, and the written word. So visual technologies such as television, smartphones and VR can provide us with long-lasting entertainment, intellectual stimulation, and social connection.

This is not so for other species. While some dogs might watch TV, their interest is usually short-lived unless it has a meaningful outcome, such as the opportunity to chase and bark at animals on the screen. Similarly, some cats play with iPads and digital toys for short periods, but usually only keep up the behaviour if they are intermittently given a reward when they catch the “prey”.

Despite evidence that cattle have the capacity for complex thoughts and feelings, an increasing number of cows are housed year-round in relatively boring and restrictive indoor environments.

At the same time, there is interest in providing cattle with “environmental enrichment”. This takes the form of objects and activities to provide physical and mental stimulation, in the same vein as toys and puzzles for pets and zoo animals. As well as improving the animals’ well-being, it seems to improve dairy production outcomes.

Good animal enrichment addresses the physical and behavioural needs of different species that are not already met in their existing environment. Good enrichment can also give animals more agency – more control over their lives and their environment. For cows, enrichment might look more like a sophisticated brush than a VR headset.

In our research, we have investigated approaches to designing technology-based enrichment that responds to animals’ real needs. In 2016 we trialled digital enrichment for orangutans at Melbourne Zoo, offering the animals a range of games and apps that could be made more complex as animals learn.

How tech for animals can change humans

There seems to be something inherently fascinating in seeing animals using technology that is “meant for humans”.

When we provided digital games for orangutans at Melbourne Zoo, we investigated the effect on visitors’ perceptions of the primates. We found that seeing the animals using technology influenced people’s empathy for the orangutans. Others have also proposed that digital games for pigs might encourage people to reflect on the needs of farm animals.

So while VR for cows may not directly improve their well-being, it just might encourage people to think more about what animals need.

Touchscreens for dogs, wearables for chickens—welcome to the world of animal technology

Provided by
The Conversation


This article is republished from The Conversation under a Creative Commons license. Read the original article.

Citation:
Virtual reality won’t make cows happier, but it might help us see them differently (2019, November 29)
retrieved 29 November 2019
from https://phys.org/news/2019-11-virtual-reality-wont-cows-happier.html