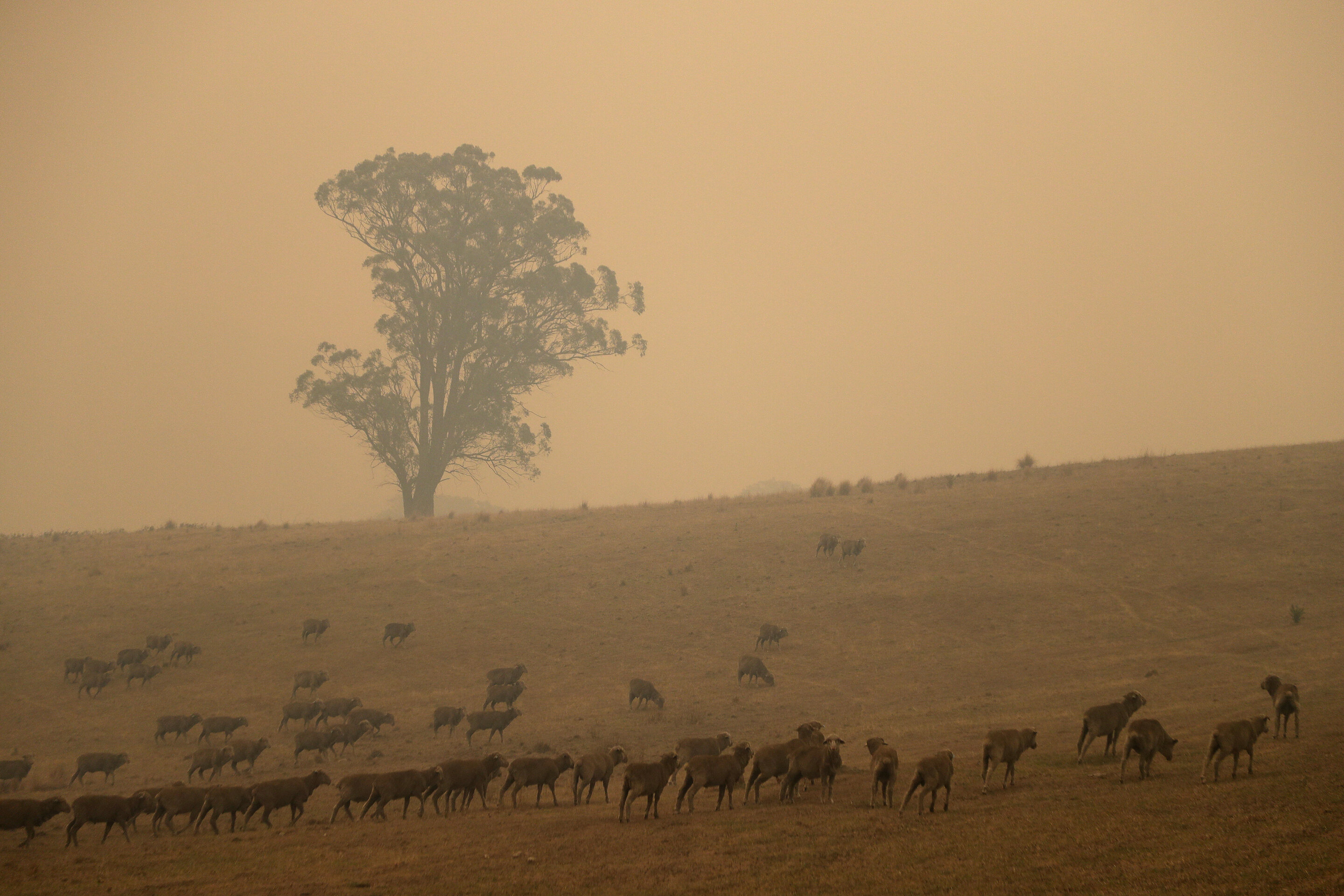 Two wildfires merged to form a massive inferno in southeastern Australia and a man suffered serious burns protecting a home, in a night of treacherous conditions during the nation’s unprecedented wildfire crisis, officials said Saturday.

Authorities were assessing the damage after firefighters battled flames fanned by strong winds through the night and lightning strikes sparked new blazes in New South Wales and Victoria, Australia’s most populous states. Conditions were milder Saturday and forecast to remain relatively benign for the next week.

A man suffered burns protecting a home near Tumbarumba in southern New South Wales and was airlifted to a Sydney hospital in serious condition to undergo surgery, Fitzsimmons said.

Several firefighters received minor burns and one suffered shortness of breath, but they were not admitted to a hospital, he said.

With no heavy rain expected, the 640,000-hectare (1.58 million-acre) blaze that formed overnight when two fires joined in the Snowy Mountains region near Tumbarumba, close to the Victorian border, is expected to burn for weeks, officials said.

The fire crisis in Australia has killed at least 26 people, destroyed more than 2,000 homes and scorched an area larger than the U.S. state of Indiana since September.

It also has brought accusations that Prime Minister Scott Morrison’s conservative government needs to take more action to counter climate change, which experts say has worsened the blazes. Thousands of protesters rallied late Friday in Sydney and Melbourne, calling for Morrison to be fired and for Australia to take tougher action on global warming.

The protesters carried placards saying, “We deserve more than your negligence,” “This is ecosystem collapse” and “We can’t breathe,” referring to wildfire smoke that has choked both cities.

Australia is the world’s biggest exporter of coal and liquid natural gas. Australians are also among the worst greenhouse gas emitters per capita.

On Friday, thousands of people in the path of fires fled to evacuation centers, while some chose to ignore evacuation orders and stayed to defend their homes.

Evan Harris, who lives in the New South Wales rural village of Burragate, said police and fire crews told him he should leave his cottage because of the threat. He told them he wasn’t going anywhere.

Burragate was choked with smoke for several hours Friday and was directly in a fire’s path.

A fire strike team and several members of the Australian Army arrived to try to save properties, and they were prepared to hunker down in a fire station if the flames overran them.

In the end, the winds died down and so did the fire. But crews worry the flames will flare up again during a fire season that could continue for months.

Harris said he likes to live off the grid in his remote home, which is made from mud bricks. He has no electricity, instead using batteries to power the lights and a small wood burner to heat water. The cottage itself has a warm and cozy feel. And Harris feels like he has a point to make.

“If this house survives, I think it will be a bit of a wake-up call for people,” he said. “That maybe people should start building like this, instead of over-exorbitant houses.”

Harris prepared for the blazes by tacking sheets of iron over his windows and clearing the area around the house of grass and shrubbery that might have caught fire. He dug a hole away from the cottage to house his gas canisters.

Harris said he was disappointed in the environmental destruction and that people should be paying attention to the more sustainable way that indigenous Australians previously lived.

“This is a result of the human species demanding too much of the environment,” he said of the wildfires.