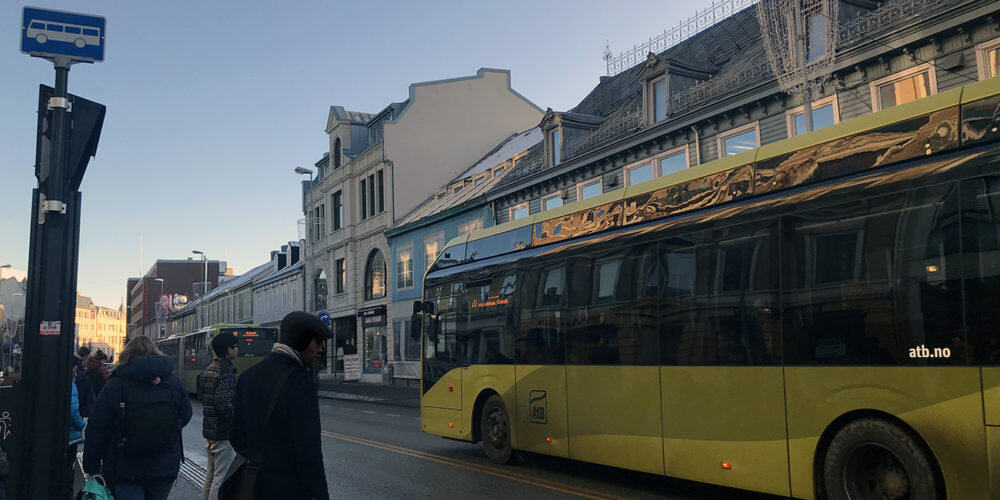 Norway’s largest current road project is the E39 Coastal Highway Route, which stretches from Kristiansand to Trondheim. The ongoing project will make the route ferry-free and shorten the driving time between locations along this route.

China’s giant investment in transport and infrastructure is referred to as the “New Silk Road” and extends transport routes across several continents. We will return to this in more detail later.

These major transport initiatives raise the question of how they will affect both the climate and the environment.

“It’s challenging to facilitate more transportation and reduce climate emissions simultaneously, but transport and trade are bound to increase in the future. What is important now is to make the transport systems as smart and climate-friendly as possible,” says Carl Christian Thodesen.

He has headed the Department of Civil and Environmental Engineering at NTNU for the past six years and has been central to the collaboration with Chinese research groups. He was also instrumental in developing two major EU projects that received the green light from the EU just before the summer.

“We recognize that the world’s infrastructure is growing extremely fast and that we have to think smart and be climate smart. The construction and transport sectors account for 40 percent of CO2 emissions and energy consumption today. We have to drastically lower this rate,” says Thodesen.

“Thinking sustainably also gives us a competitive edge. Climate-smart solutions will be prioritized and preferred in the future,” he says. Thodesen took a position as dean of the Oslo Metropolitan University this autumn.

The collaboration between Chinese universities, NTNU and SINTEF began in 2017, and took a solid step further during a visit by Norwegian researchers and educators in April 2018.

We had long thought about doing something with China. What’s happening in China when it comes to transport and construction is enormous, and the universities have incredibly good lab facilities,” says Thodesen.

They are working on issues such as:

Through the eye of the EU needle

SMUrTS and HERMES are acronyms for the two EU projects for which NTNU and SINTEF have won EU research funding. They are being led by NTNU and SINTEF respectively, and are part of The Sustainable and Liveable Cities and Urban Areas call.

Electrifying the transportation sector is an important step towards making transport more environmentally friendly. Several countries are starting to electrify buses in urban areas. In Norway, the largest cities have started the transition to e-buses.

The SMUrTS project aims to help authorities in different countries develop an approach to improving the electrification of public transport systems and making the transition from conventional buses to electric buses as smooth as possible.

Plenty of obstacles ahead

SMUrTS is working to find solutions for electric buses in extreme conditions, such as in the tough Nordic climate and in extremely large cities.

“In Norway, the cold climate is a challenge in terms of battery capacity. Tests on Tesla cars in the United States show that battery capacity is reduced by 40 percent in the winter,” says Chaoru Lu at NTNU. Lu is a postdoc at NTNU and was educated at Beijing Jiatong Universtity and Iowa State University. Lu and NTNU associate professor Trude Tørset are the SMUrTS project managers.

“During this transitional period, until we overcome the limitations of e-buses, it’s more realistic to develop a city transportation system with a mix of conventional and electric buses. That way you can maintain the service standard of the transportation network,” says Lu.

Research needs to be useful for relevant actors

Since electric buses are relatively new, data collection and information is needed on how e-buses are working and how the transition from conventional buses to electric buses is going.

The researchers will be collecting a variety of data from the public transport company AtB in Trondheim, which this autumn inaugurated 36 electric buses in the transport network.

“Our goal with the research is to make a difference for the actors who are working on public transportation. This means that our research and our analyses need to provide useful information that ATB can use in transitioning to electric buses,” says Lu.

AtB, the transport company in Trøndelag County, where NTNU is located, thinks that the transition to electric buses has gone well so far.

“Clearly, challenges inevitably come up that you haven’t foreseen or planned for when undertaking something new. But we haven’t faced more challenges than you’d expect when making these kinds of changes,” says Tom Nørbech, division manager of technology and mobility services at AtB.

One challenge of switching over to electric buses, according to Nørbech, is that you no longer get your energy from filling stations but from charging stations, so you have to build a new and completely different type of infrastructure.

He thinks access to the SMUrTS analyses of what AtB does is important in this transition. The project is being conducted at “a high professional level, by people who are at the forefront of this type of research. It’s clear that both the analyses and access to the expertise of the collaborating partners are very valuable to us,” he says.

This research project plans to collect data on environmental benefits, costs, efficiency, energy consumption on electric buses and on conventional buses, and the influence of the weather and climate on energy consumption.

“We’re looking at the big picture, and data from multiple fields gives us a bigger picture of how best to plan. Based on the data we collect, we’ll create models that we can customize for public transit companies to help solve their challenges,” says Lu.

The researchers also have access to data from Beijing, where large distances are a challenge in terms of battery capacity. For megacities like Beijing, the researchers are developing specific models based on the data and challenges that such cities have.

“We’re finding that the interest and need for electricity-based transport are strong around the world. Technology is evolving rapidly and transportation systems are changing really quickly. That’s why we need a new green transportation policy soon,” he says.

The research will run for three years and has a budget of almost NOK 9 million (€ 877,000). NTNU is leading the project, and the collaborating partners are from China, Sweden and Norway.

HERMES is the second research project to come through the eye of the EU needle, led by SINTEF.

In Europe alone, more than 275 million tonnes of asphalt are produced each year for road maintenance and rehabilitation. This results in high resource consumption and the release of large amounts of greenhouse gases into the atmosphere.

“HERMES is developing a new methodology in order to reduce the climate impact of road maintenance and rehabilitation. The goal is to find and choose the best available technology and strategy with the lowest cost to the environment and society,” says Terje Kristiansen of SINTEF, who is leading the project.

To develop the new method, researchers will study and analyse infrastructure in selected locations in Norway, China and Austria. The project partners come from these three countries.

Analysing the life cycle of asphalt

HERMES aims to develop a practical method for grading “green asphalt,” based on the Principles of Life Cycle Assessments (LCA).

LCA is a life cycle analysis method and a technique for mapping environmental impacts associated with all stages of a product’s life: from raw material extraction through materials, production, use, maintenance and disposal or recycling. The method is used to analyse and assess what can then be done to reduce the environmental impact.

“The new method we’re developing will make it much easier to see how the different elements of road construction contribute to pollution from a life cycle perspective. This insight will enable us to gain a better understanding of the reduction potential by implementing various measures on the material, construction and operation sides,” says Kristensen.

Creating a climate account for asphalt and road maintenance will make it easier to see where environmental benefits can be obtained.

“Being able to have an impact on climate reductions in China will make a big difference worldwide,” Kristensen says.

“China has a high level of expertise in technology and research and is a growth market. We’re seeing that China is increasingly important for the EU and that research cooperation between the EU and China is becoming more active. That is why it’s also important to build up our China expertise,” says Kristensen.

Such expertise is created through collaborative projects like HERMES and SMUrTS.

The research project has a budget of just over NOK 11 million (€ 1,117 263) and will also run for three years. The project emphasizes the exchange of personnel between the EU and Chinese partners.

The Silk Road has its origins many centuries back in time. This was the name for a number of trade routes that ran between Europe, China / Asia and the Middle East. The route network stretched across 6,000 km and derived its name from the lucrative trade in Chinese silk. The trade route was established during the Chinese Han Dynasty (206 BC—220 AD).

In addition to trade, the Silk Road led to widespread cultural exchange between different countries and continents.

Business traveler and explorer Marco Polo from Venice contributed greatly to making the Silk Road and the East known to Europeans. In the 13th century, he embarked on a lengthy expedition to the Middle East, Mongolia and China with his father and uncle.

After about 20 years abroad, and bearing many experiences and new knowledge, they finally returned home. The East was mysterious and unfamiliar to Europeans at that time, and Marco Polo’s journey along the Silk Road became widely known through the travelogue Livre des merveilles du monde (Book of the marvels of the world, commonly called The Travels of Marco Polo in English), which became very popular.

European countries’ desire to trade directly with China was the main motivator for discovering a sea route to China. In the year 1480, Portuguese ships rounded the Horn of Africa for the first time. The Netherlands and the United Kingdom followed in the 17th century.

Until the beginning of the 19th century, China was regarded as the richest and most sophisticated of all civilizations on earth.

Trade and goods transport are also the main reason for China’s new giant transportation concept called “The New Silk Road.” It consists of several routes, on both land and water. The ambition is to create a continuous transport connection—by road, train and ship—between China and the rest of the world.

The project goes by the names One Belt, One Road (OBOR) and Belt and Road Initiative (BRI).

The transportation network will consist of:

This is being called the world’s largest infrastructure project. China’s powerful leader Xi Jinping launched the worldwide project in 2013, and many steps have already happened since then.

More information:
You can read more in the article What is China’s Belt and Road Initiative? from the British newspaper The Guardian.
Provided by
Norwegian University of Science and Technology