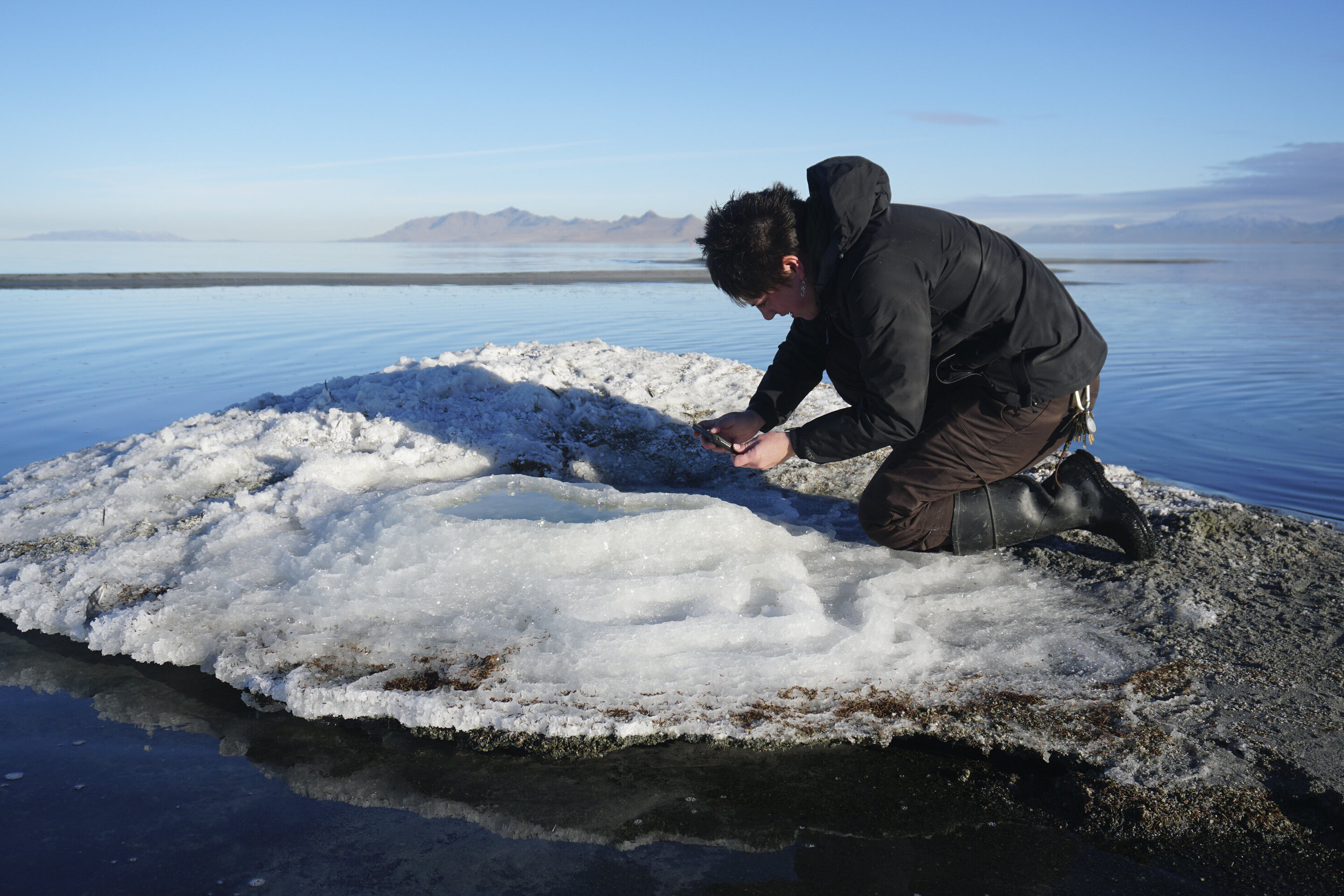 Rare salt formations have been documented for the first time on the shores of the Great Salt Lake, and they could yield insights about salt structures found on Mars before they disappear for good.

They’re showing up now in part because water levels at the largest natural lake west of the Mississippi have been lowered by drought and water diversion, exposing more shoreline. It’s a story that’s playing out throughout the American West as a growing population puts more demand on scarce water resources.

Along the high-salinity waters Great Salt Lake, the expanded shoreline means there are more places where water can bubble up to the surface from warm, sulfate-rich springs. When it hits the cold air, a mineral called Glauber’s salt, or mirabilite, separates out.

“It has to be exposed to just the right conditions,” said park ranger Allison Thompson, who first saw them in October.

The tiny crystals have built up over the last several months, eventually creating flat terraces stacked atop one another like the travertine rimstone and dam terraces at Yellowstone’s Mammoth Hot Springs.

From far away, the mounds can blend into the snowy landscape along the flat blue of the lake edged by distant mountains. From above, though, the cascading terraces are like an enormous piece of lace laid over the sandy earth. An up-close look reveals long, spire-like crystals clustered jaggedly together like something out of science fiction.

There are now four mounds at the Great Salt Lake beach, growing up to 3 feet (1 meter) tall and several yards wide.

Mirabilite mounds are seen more often in places such as the Arctic, bolstered by the constantly cold temperatures. There are also indications of similar structures on Mars, so study of the mounds in Utah could offer clues on how to examine salts found there.

Salt deposits on Mars could hold clues about whether groundwater or even life was ever supported on the red planet, said Robert Zubrin, president of the Mars Society, a nonprofit group that runs a station simulating the planet in the Utah desert that isn’t involved with studying the Great Salt Lake mounds.

“What would that look like? What would be the right detection instrument or technique?” he said.

But researchers don’t have long to study the Great Salt Lake formations: As winter turns to spring, warming temperatures mean the salt won’t continue to precipitate out of the water and the mounds will disintegrate into a fine dust.

“That powder will eventually get blown away or dissolve into the lake,” said Elliot Jagniecki, a geologist with the Utah Geological Survey. Park rangers will be conducting guided tours to the mounds in Utah this weekend.

The mounds are expected to be gone by February, and eventually melting snow will send runoff into the lake, raising lake levels and likely swallowing up the sites.

That’s part of normal fluctuations with the seasons and drought cycles, but overall the lake isn’t covering as much ground as it once did, said Kevin Perry, professor of University of Utah who has studied stretches of dry lake bed. Much of that is due to water being diverted away from rivers that feed the lake for agriculture and other uses before it reaches the lake, he said.

Other water bodies in the West have faced similar pressures, including California’s Owens Lake. It dried up as water was diverted to Los Angeles over the last century, leaving wind-blown dust that polluted the air before a recent anti-dust project brought some water back.

While the Great Salt Lake is now recovering from a drought cycle, the long-term trend has been a slow loss of about a ½ foot (15 centimeters) per decade, Perry said.

There can be a perception that water flowing to the Great Salt Lake is wasted because it’s too salty to support much life beyond brine shrimp, but Perry said that’s wrong. Brine shrimp are a $1.3 billion industry in Utah, and the wetlands around the lake are a welcome haven for mitigating birds.

“People have this viewpoint that every drop of water that makes it into the lake is unusable,” he said. “They are missing the point that the lake and its ecosystem has needs, and those needs are not being met.”