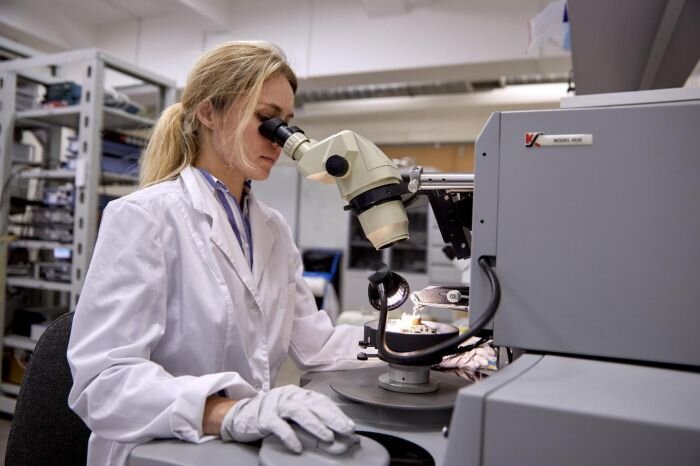 Researchers from the Moscow Institute of Physics and Technology, Lomonosov Moscow State University, and the Institute of Solid State Physics of the Russian Academy of Sciences have demonstrated the possibility of detecting Abrikosov vortices penetrating through a superconductor-ferromagnet interface. The device considered in their study, published in Scientific Reports, is a ferromagnetic nanowire with superconductive electrodes connected to it.

Olga Skryabina, the first author of the paper and a researcher at the MIPT Laboratory, says: “The research objective was studying the co-existence of antagonistic phenomena in 1-D superconductor-ferromagnet systems. Such systems have recently been of great interest due to their strong magnetic anisotropy with various dimensional and spin effects. These phenomena make such systems a promising choice for functional hybrid nano-devices, e.g., superconducting current converters, spin valves, magnetoresistive RAM. We connected a ferromagnetic nickel nanowire to superconducting niobium electrodes.”

The researchers have investigated a system of two superconducting niobium electrodes connected by a nickel nanowire (Figure 1). It has been found that as the magnetic field varies, the nanowire resistance strongly depends on the effects occurring at the superconductor-ferromagnet boundary. 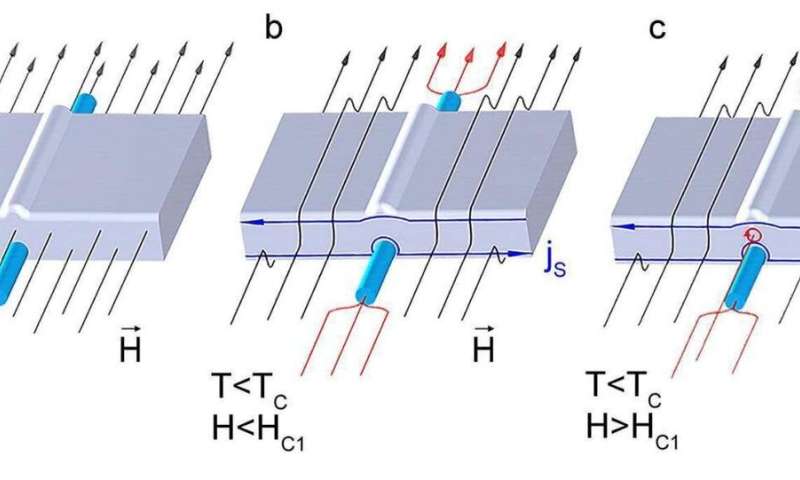 The processes occurring in the niobium (grey block) / nickel nanowire (blue cylinder) system under various ambient conditions. (a) The temperature is above critical. The system is in its normal state, the magnetic field (black arrow) is passing through the entire sample. (b) The temperature is below critical. When Hc H Hc1 , the magnetic field (black arrow) concentrates at the ferromagnetic nanowire (red arrows) and is shielded by the niobium (black arrows.) (c) T Tс, as the critical magnetic field strength H > Hc1 is exceeded, an Abrikosov vortex penetrates the niobium (marked with the red circle.) . Credit: O. V. Skryabina et al., Scientific Reports

First, the physicists considered the system in its normal state, when the temperature is above the critical one, and the magnetic field equally penetrates all the parts of the structure (Figure 2a.) The sample resistance did not change significantly with the increase of the magnetic field strength. Then the researchers lowered the temperature below the critical value. The niobium electrodes transitioned into a superconducting state, and their resistance dropped to zero. At the same time, the experimenters observed a drastic rise of the system resistance. The only explanation for this was the contribution of the superconductor-ferromagnet boundaries to the resistance. Concurrently, the niobium started conducting shielding currents, and the superconductor began expulsing the magnetic field (Figure 2b). These phenomena result in unusual sawtooth magnetic resistance curves, and a shift relative to various sweeps (Figure 3.)

Olga Skryabina continues: “We placed the sample in a magnetic field parallel to the nanowire centerline. It was found that by measuring the sample resistance under such conditions, we can detect the moment when a magnetic flux quantum enters or exists a superconducting.”

A vortex penetration and exit into/from the niobium (Figure 2c) cause the sawtooth electrical resistance. The nickel nanowire in the system acts like a lightning rod that “attracts” the magnetic field. A contact with it weakens the niobium electrode superconductivity, and, thus, localizes the Abrikosov vortices penetration point. The research demonstrates an immense difference between these superconducting chains and conventional electric circuits. There is a need for more research of hybrid superconductor devices to develop more advanced superconducting digital and quantum computers, and supersensitive sensors.