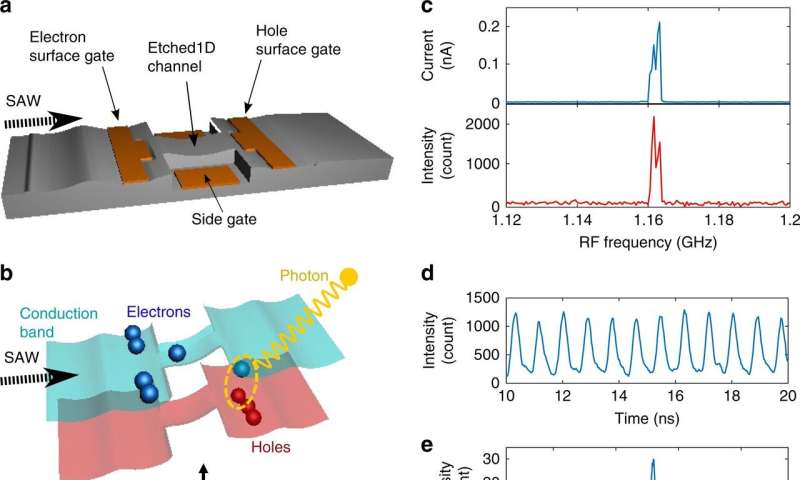 SAW-driven lateral n-i-p junction, and its electrical and optical properties. a Schematic of the device. Electron and hole surface gates induce electrons (n-region) and holes (p-region) in a GaAs quantum well, forming a lateral n-i-p junction along an etched 1D channel. A SAW is generated by applying an RF signal to a transducer (placed 1 mm from the n-i-p junction). b Schematic diagram showing the band structure of the n-i-p junction modulated by the SAW potential, for an applied forward bias less than the bandgap. A single electron is carried in each SAW minimum, creating a single photon when it recombines with a hole. c S-D current (top) and EL intensity (bottom) as a function of applied RF frequency at an RF power of 9 dBm. They both show a significant enhancement around 1.163 GHz, which is the resonant SAW frequency of the IDT. d SAW-driven EL intensity as a function of time. The 860 ps periodic feature corresponds to the applied SAW frequency of 1.163 GHz. e Energy spectrum of the SAW-driven EL. The spectrum shows a peak at 1.531 eV (FWHM ~ 1 meV), which matches the exciton energy in the quantum well. Credit: Nature Communications (2020). DOI: 10.1038/s41467-020-14560-1

Researchers at the University of Cambridge have developed a novel technique for generating single photons, by moving single electrons in a specially designed light-emitting diode (LED). This technique, reported in the journal Nature Communications, could help the development of the emerging fields of quantum communication and quantum computation.

A single photon, the elementary particle of light, can carry a quantum bit of information over hundreds of kilometres. Therefore, a source that can generate single photons is an important building block in many quantum technologies. Up to now, single-photon sources have been made in research labs from self-assembled quantum dots in semiconductors, or structural defects in diamonds. The formation of these dots and defects is a random process, so it is hard to predict the location and the photon energy (or wavelength) of these single-photon sources. This randomness may pose a challenge in integrating a source into a large quantum network.

In this article, the researchers show that they can generate a single photon in a different, controlled, way, without the need for a quantum dot or a defect, by moving only one electron at a time to recombine with a ‘hole’ (a missing electron in a filled ‘band’ of electrons).

‘Imagine trying to send a digital message by firing a stream of blue or red balls over a wall in the following way. A conveyor belt with ball-sized indentations drags a series of white balls up a slope and drops the balls off a cliff at the end. Each ball picks up speed as it falls, is then sprayed blue or red (depending on the message) as it bounces off to the side and over the wall’, explains Dr. Tzu-Kan Hsiao, who did the experiment during his Ph.D. at Cambridge.

`The indentations in the conveyor belt can only carry one ball each.

Only one ball gets sprayed at a time, and there’s no chance some of the balls are intercepted by an eavesdropper without the person on the receiving end noticing a missing ball, whereas if sometimes two or more balls come at a time, the eavesdropper can catch odd balls and the receiver is none the wiser. In that way, some of the message may be unintentionally disclosed.’

‘In the experiment, we made a device near the surface of Gallium Arsenide (GaAs) by using only industry-compatible fabrication processes. This device consists of a region of electrons close to a region of holes, and a narrow channel in between’, says Professor Christopher Ford, team leader of the research.

‘In order to transport only one electron at a time, we launch a sound wave along the surface. In GaAs such a “surface acoustic wave” also creates an accompanying electrical potential wave, in which each potential minimum carries just one electron. The potential wave, like a conveyor belt, brings individual electrons to the region of holes one after another. A series of single photons is generated when each electron quickly recombines with a hole before the next electron arrives.

Each single photon could be given one of two polarisations to carry a message such that an eavesdropper cannot intercept the message without being detected.

In addition to being a novel single-photon source, more importantly, it may be possible with this new technique to convert the state of an electron spin to the polarisation state of a photon. By bridging semiconductor-based quantum-computers using single photons as ‘flying’ qubits, the ambitious goal of building large-scale distributed quantum-computing networks may be achieved.

A cavity leads to a strong interaction between light and matter