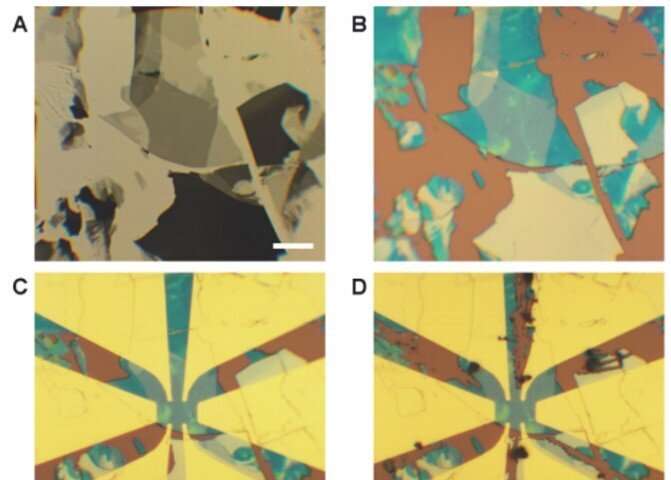 Fabrication of MnBi2Te4 thin-flake device. (A) Optical image of representative few-layer MnBi2Te4 flakes cleaved onto Al2O3 thin film. The MnBi2Te4/Al2O3 stack is supported by a PDMS substrate. Image was obtained in transmission mode. Scale bar: 20 μm. (B) Optical image of the same MnBi2Te4/Al2O3 stack transferred on to a 285-nm SiO2/Si substrate. Tape residue is visible under the Al2O3 film; the residue does not affect sample fabrication and subsequent measurements. (C) Optical image of a device fabricated from the sample shown in B. Metal (Cr/Au) contacts to the sample were thermally evaporated through a stencil mask. (D) Optical image of the same device after removing excess MnBi2Te4 flake that shorts adjacent electrodes with a sharp tip. Credit: Science, doi: 10.1126/science.aax8156

Nontrivial band topology can combine with magnetic order in a magnetic topological insulator to produce exotic states of matter such as quantum anomalous Hall (QAH) insulators and axion insulators. An aim of condensed matter physics is to find new materials with useful properties and apply quantum mechanics to study them. The field has allowed physicists to better understand the uses of magnets for hard disk data storage, computer displays and other technologies. The recent discovery of topological insulators have attracted broad interest and researchers predict that the interplay between ferromagnetism and the topological insulator state can realize a range of exotic quantum magnetic phenomena of interest in fundamental physics and device applications.

In a new report, Yujun Deng and a research team at the departments of physics and quantum matter physics in China, probed quantum transport in a thin flake MnBi2Te4 topological insulator, with intrinsic magnetic order. The ferromagnetic layers coupled anti-parallelly to each other in the atomically thin MnBi2Te4 layered van der Waals crystal. However, the sample became ferromagnetic when it contained an odd number of septuple layers. The research team observed the zero-field QAH effect in a five-septuple-layer specimen at 1.4 Kelvin. The results established MnBi2Te4 as an ideal platform to explore exotic topological phenomena with spontaneously broken time-reversal symmetry. The work is now published on Science.

Topological materials distinctly contain topologically protected quantum states that are robust against local distresses. For instance, in a topological insulator (TI) such as bismuth telluride (Bi2Te3), the bulk band topology can guarantee the existence of two-dimensional (2-D) surface states with gapless Dirac dispersion. By introducing magnetism into the initially time-reversal invariant topological insulators (TIs), scientists can induce profound changes in their electronic structure. For example, to experimentally observe the QAH effect in chromium-doped (Bi, Sb)2Te3, physicists had to precisely control the ratio of multiple elements in a non-stoichiometric material. Fine-tuning the material required reconciling conflicting demands and therefore, researchers had to precisely quantize the anomalous Hall effect only at temperatures up to T = 2 K, far below the Curie temperature and exchange gap in the material. To further explore the rich topological phenomena and their potential applications, researchers must use intrinsic magnetic TIs (topological insulators) with an innate magnetic order to study their topological effects in pristine crystals. 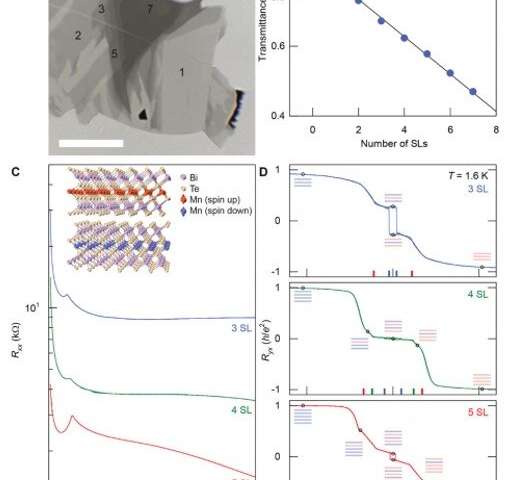 Fabrication and characterization of few-layer MnBi2Te4 devices. (A) Optical image of few-layer flakes of MnBi2Te4 cleaved onto thermally-evaporated Al2O3 thin film (thickness ~ 70 nm). The MnBi2Te4/Al2O3 stack is supported on a PDMS substrate. Image was taken in transmission mode. Number of SLs are labeled on selected flakes. Scale bar: 20 μm. (B) Transmittance as a function of number of SLs. The transmittance (filled circles) follows the Beer-Lambert law (solid line). (C) Temperature-dependent sample resistance of few-layer MnBi2Te4. The antiferromagnetic transition manifests as a resistance peak in the three-, four- and five-layer samples (Sample 3a, 4a and 5a, respectively; see table S1). Inset: layered crystal structure of MnBi2Te4 in the antiferromagnetic state. The spins of Mn2+ ions order ferromagnetically within a layer, whereas neighboring layers couple antiferromagnetically with an out-of-plane magnetocrystalline anisotropy. (D) Ryx of the same three-, four-, and five-layer MnBi2Te4 samples shown in C as a function of external magnetic field applied perpendicularly to sample plane. Data were obtained at T = 1.6 K. All data sets were anti-symmetrized to remove Rxx component (23). The external magnetic field flips individual ferromagnetic SLs, one SL at a time, and eventually fully polarizes all SLs. The magnetic transitions manifest as jumps in Ryx that are marked by colored ticks on horizontal axes. Cartoons illustrate the magnetic states at representative magnetic fields (marked by open circles). SLs with up (down) magnetization are shown in red (blue). For simplicity, only one of the possible configurations are shown when there are degeneracies; we also ignore magnetic domains that may be present in some of the magnetic states. Credit: Science, doi: 10.1126/science.aax8156

The team started with high quality MnBi2Te4 crystals grown using a flux method to obtain atomically thin MnBi2Te4 via Al2O3-assisted exfoliation. To accomplish this, they thermally evaporated Al2O3 thin film onto a freshly prepared surface of the bulk crystal, lifted the bulk using a thermal release tape then released the combined Al2O3/MnBi2Te4 stack on to a piece of transparent polydimethylsiloxane (PDMS) for microscopic inspection. Thereafter, they stamped the thin flakes onto a silicon wafer covered with SiO2, followed by deposition of Cr/Au contacts for transport measurements. The team completed the process in an airtight box to prevent sample exposure to oxygen (O2) and water (H2O) to mitigate sample degradation. They then extensively studied the rich set of magnetic states for the few-layered samples. 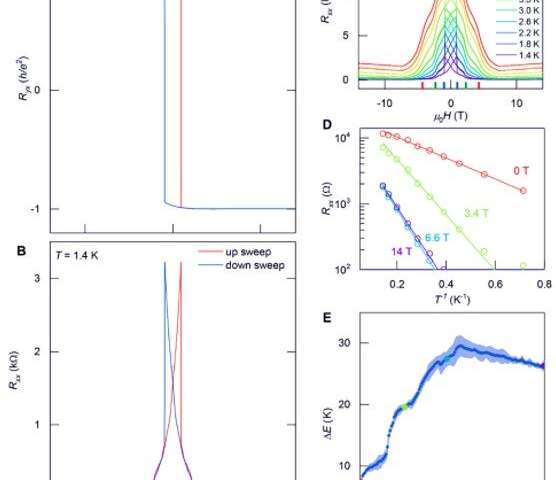 Quantum anomalous Hall effect in a five-layer MnBi2Te4 flake. (A and B) Magnetic-field-dependent Ryx (A) and Rxx (B) acquired in the five-layer Sample 5b at T = 1.4 K. Ryx and Rxx data shown here are anti-symmetrized and symmetrized, respectively, to remove the mixing of the two components (23). Up and down sweeps of the magnetic field are shown in red and blue, respectively. Ryx reaches 2 0.97 / h e , concomitant with a Rxx of 2 0.061 / h e at μ0H = 0 T. These features are unambiguous evidence of zero-field QAH effect. External magnetic field polarizes the ferromagnetic SLs individually, and further improves the QAH quantization; Ryx quantizes to 2 0.998 / h e under magnetic fields above μ0H ~ 2.5 T. (C) Rxx of Sample 5b as a function of magnetic field acquired at various temperatures. Data are symmetrized to remove Ryx component. (D) Arrhenius plot of Rxx as a function of 1/T under representative magnetic fields. Solid lines are line fits, the slope of which yields the energy gap of the thermally activated charge transport. (E) Energy gap as a function of magnetic field extracted from fitting the Arrhenius plots exemplified in D. Shaded region represents the error bound of the energy gap from the line fits. Solid circles highlight the representative gap values obtained from the fittings shown in D. Colored ticks on horizontal axes on panel B, C and E mark the location of magnetic transitions. All data were obtained under a backgate bias of Vg = −200 V. Credit: Science, doi: 10.1126/science.aax8156

Deng et al. observed a well-developed QAH effect at zero magnetic field in a five-layer MnBi2Te4 of much improved sample quality. They noted that an external magnetic field further improved the quantization by aligning the ferromagnetic layers. The ferromagnetic alignment also improved the robustness of the QAH effect against thermal fluctuations. At zero magnetic field, they obtained an energy gap that exceeded the value in magnetically doped Ti thin films, although still much smaller than the exchange gap expected for MnBi2Te4.

The energy gap did not directly measure the bandgap of the surface states in the crystal, but characterized the minimum energy required to excite an electron from the valence to the conduction band. For instance, a large difference between the energy gap and the predicted bandgap implied various disorders in the sample. As a result, there is much room to further increase the energy scale of the QAH effect in pristine, high-quality MnBi2Te4 samples. 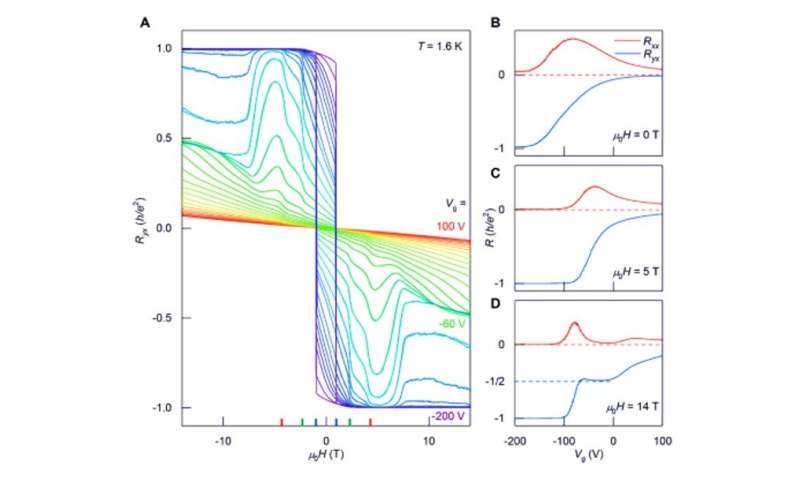 Gate-tuned quantum anomalous Hall effect in a five-layer MnBi2Te4 flake. (A) Magnetic-field-dependent Ryx, acquired in Sample 5b, under varying gate biases Vg (in 10 V steps). All data were obtained at T = 1.6 K. Curves are anti-symmetrized to remove Rxx component. Colored ticks on horizontal axis mark the location of magnetic transitions. (B to D) Rxx and Ryx as functions of Vg under three representative magnetic fields, μ0H = 0 T, 5 T and 14 T. An additional plateau of ( ) 2 / 2 R he yx = − emerges at Vg ~ −25 V, accompanied by a vanishing Rxx (panel D). The same plateau is also visible in A at μ0H > 10 T during field sweeps under Vg = −60 V. This evidence points to a quantized Hall state with a filling factor v = −2. All data were obtained in the same Sample 5b, but Vg values do not exactly match those in A because of hysteresis during gate sweeps. Credit: Science, doi: 10.1126/science.aax8156

After the applied external magnetic field fully polarized the five-layer sample, the energy gap diminished with increasing magnetic field. The QAH states gradually evolved in the experimental setup providing a peek into the electronic structure of the surface bands outside the bandgap. Deng et al. understood all states observed in the study from a unified view. The Hall measurements near zero magnetic field yield a gate efficiency of 5 x 1010 cm-2/V, which agreed well with the efficiency estimated from the device geometry. Since MnBi2Te4 is a layered material, the team expect the techniques developed for 2-D materials to be applicable to MnBi2Te4. In this way, Yujun Deng and colleagues anticipate that van der Waals heterostructures integrating MnBi2Te4 with other magnetic/superconducting 2-D materials will provide fertile ground to further explore exotic topological quantum phenomena.