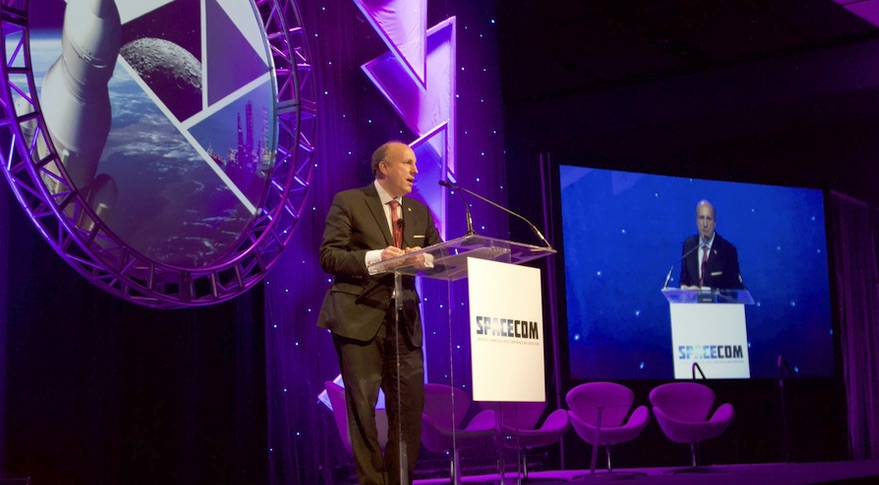 HOUSTON — The Department of Energy, whose interaction with the space industry has largely been in nuclear power systems, is working to broaden its role by emphasizing its overall research capabilities.

In a Nov. 21 speech at the SpaceCom Expo here, Paul Dabbar, the Undersecretary of Energy for Science, said the research labs of the department offered capabilities for the space industry that range from quantum computing networks to astronomy and planetary defense.

“I believe that humanity is at the cusp of major movements around innovation in six particular areas,” he said in his speech, with space one of those areas alongside artificial intelligence, genomics and others. “I think we are very much on the cusp of making major strides in what we can do and what we’re going to be able to learn.”

Dabbar said the Energy Department is working on about 80 projects with NASA and others in the space community. In an interview after his speech, he said he’s trying to highlight those existing partnerships as well as seek new opportunities in space for the department to be involved.

“I think the reality is, of the $18 billion or so a year of R&D spending that we have, most people don’t understand the breadth of what we currently do,” he said. “When you have 60,000 researchers running around doing things, no one knows 100% of all the different research strings that are going on.”

“Space is probably one that’s on the lower end of awareness,” he added, “which is certainly why I wanted to come here and talk a bit about this to a broader audience.”

In the later interview, Dabbar said extending a quantum network to space was a long-term goal of the department’s work in this area, rather than a near-term application. “There’s a lot of technology to get from here to there, but what I wanted to mention is that the possibilities we’re looking it,” he said. “It’s still some time off, but I did want to mention that this is clearly a research string that we have and it is clearly aspirational as we build out the overall technology.”

In the near term, Dabbar emphasized the department’s capabilities in areas like radiation-hardened electronics that it can make available to space companies. “We would welcome engagement with the commercial sector in that particular area, which is relatively minimal,” he said.

The department’s labs do commercial work on a cost-reimbursable basis, with about 10% of the department’s overall R&D spending paid for by companies. “If there is a private sector entity that wants to do testing, for example, for rad-hardening of microelectronics for space, they don’t need to go build a lab to do the radiation tests,” he said. “They can come to us.”

Part of the Energy Department’s outreach on space includes working with other government agencies. The department is not part of the National Space Council, but Dabbar said the department does have a “constant dialogue” with the council and agencies that are a part of it.

One example of that, he said, is concerns the effect satellite megaconstellations like Starlink will have on astronomy. The Department of Energy, which funds some astronomy research, is supporting development of an instrument for the Large Synoptic Survey Telescope in Chile that will be the largest digital camera built for astronomical applications.

“One of the things we want to make certain we have awareness of is that the luminosity associated a number of the low-altitude cubesat constellations can affect the visibility of what’s up in the sky, which affects telescopes,” he said, citing as an example an image from a ground-based telescope showing streaks from a set of Starlink satellites launched earlier in November.

The department, he said, was engaged with NASA and the National Science Foundation, and the broader National Space Council, on those concerns. The goal of that effort is to ensure the broader space community “understands the impact of that, both in terms of science but also just in terms of aesthetics of seeing the night sky.”