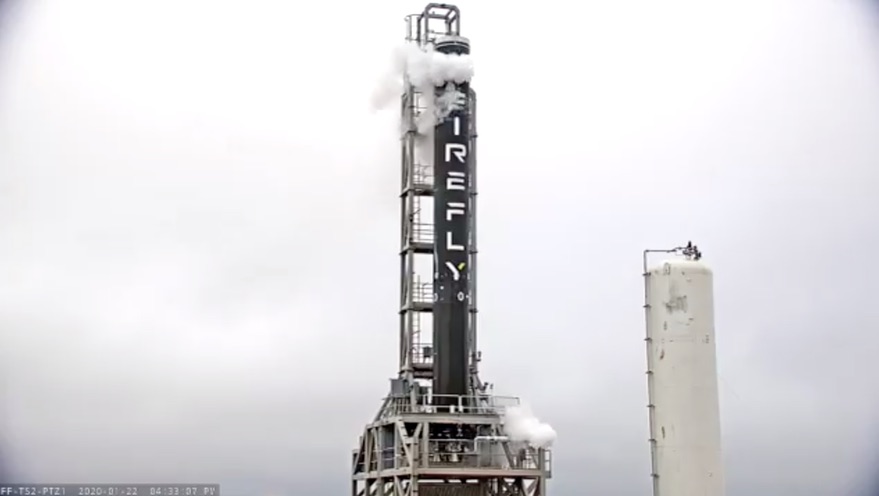 WASHINGTON — Firefly Aerospace says it had an “anomaly” during a Jan. 22 static-fire test of the first stage of its Alpha rocket under development, an incident that prompted evacuations and road closures in the vicinity in the test site.

The Burnet County, Texas, Sheriff’s Office said in a statement posted to its Facebook account that it was informed of a “possible explosion” at 7:24 p.m. Eastern at the company’s test site near the town of Briggs, north of Austin. Authorities closed roads in the vicinity of the site and started evacuations of those living within one mile (1.6 kilometers) of the site. Roads were reopened and evacuations ended three hours later, the office reported.

In a later statement, also posted to Facebook, Firefly said there was a fire, but no explosion, on its test stand. “During testing this evening we experienced a test anomaly resulting in a small fire on our test stand,” the company said. “Both the test stand and our rocket are intact. At no time was there any risk to individuals on site or the community.” The company added it would host a “community day” with local residents in the near future to discuss its test activities.

The incident took place as the company was preparing to perform a static-fire test of the first stage of its Alpha rocket. About 90 minutes before the anomaly, the company tweeted a video clip of the rocket on the test stand, being loaded with liquid oxygen. “About to attempt first Alpha Stage 1 Qual hotfire,” the company said in the now-deleted tweet.

The test was to be the first static-fire test of the first stage with all four of its Reaver engines installed. The company previously said it planned “multiple 165 sec full mission duty cycle tests” of the stage ahead of its first launch. Firefly had earlier completed testing of the rocket’s second stage, with a single Lightning engine.

The qualification test of the first stage is one of the last major tests prior to the first orbital launch of the vehicle, which prior to the incident was expected no earlier than April from Vandenberg Air Force Base in California. The rocket is designed to place up to 1,000 kilograms into low Earth orbit.

The incident took place a day after the company announced a launch services agreement with ISILAUNCH, a subsidiary of Dutch smallsat company Innovative Solutions in Space. That agreement provided ISILAUNCH with “multiple dedicated and rideshare launch opportunities” on Alpha, starting later this year.

ISILAUNCH director Abe Bonnema said in a statement that his company believed Alpha has a “very interesting capacity to cost ratio” that provided flexibility for launching smallsats to Earth orbit as well as to the moon. “Moreover, we are pleased to conclude that our business philosophy and market approach align very well with those of Firefly.”

The companies did not disclose specific terms of the agreement, such as the number of launches of value of the agreement. Firefly did not respond to questions after the announcement, but before the test anomaly, about the status of the development of the rocket and anticipated date of the rocket’s first launch. Alona Kolisnyk, Firefly’s director of international business development, said in the statement that the company “is preparing to quickly ramp flight cadence following the maiden launch of our Alpha vehicle,” but didn’t state when that first launch would take place.