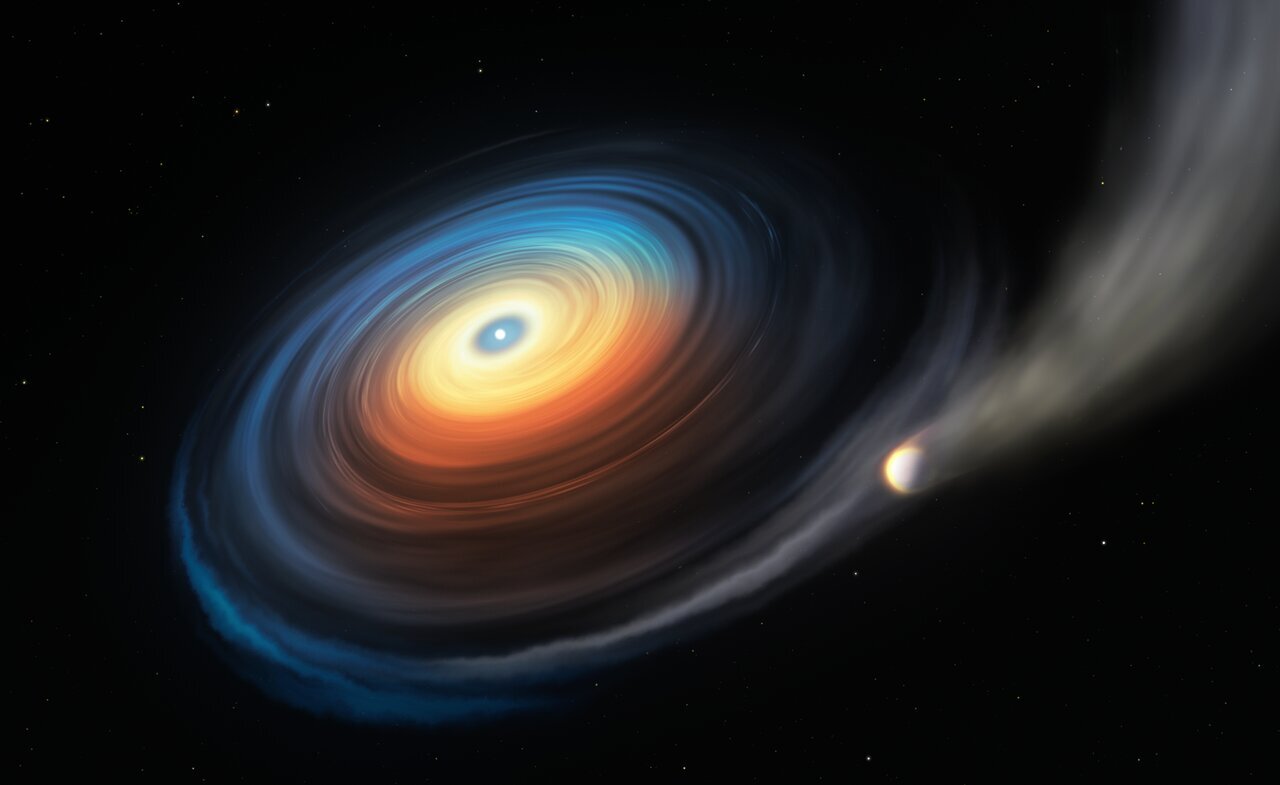 Researchers using ESO’s Very Large Telescope have, for the first time, found evidence of a giant planet associated with a white dwarf star. The planet orbits the hot white dwarf, the remnant of a Sun-like star, at close range, causing its atmosphere to be stripped away and form a disc of gas around the star. This unique system hints at what our own Solar System might look like in the distant future.

“It was one of those chance discoveries,” says researcher Boris Gänsicke, from the University of Warwick in the UK, who led the study, published today in Nature. The team had inspected around 7000 white dwarfs observed by the Sloan Digital Sky Survey and found one to be unlike any other. By analysing subtle variations in the light from the star, they found traces of chemical elements in amounts that scientists had never before observed at a white dwarf. “We knew that there had to be something exceptional going on in this system, and speculated that it may be related to some type of planetary remnant.”

To get a better idea of the properties of this unusual star, named WDJ0914+1914, the team analysed it with the X-shooter instrument on ESO’s Very Large Telescope in the Chilean Atacama Desert. These follow-up observations confirmed the presence of hydrogen, oxygen and sulphur associated with the white dwarf. By studying the fine details in the spectra taken by ESO’s X-shooter, the team discovered that these elements were in a disc of gas swirling into the white dwarf, and not coming from the star itself.

“It took a few weeks of very hard thinking to figure out that the only way to make such a disc is the evaporation of a giant planet,” says Matthias Schreiber from the University of Valparaiso in Chile, who computed the past and future evolution of this system.

The detected amounts of hydrogen, oxygen and sulphur are similar to those found in the deep atmospheric layers of icy, giant planets like Neptune and Uranus. If such a planet were orbiting close to a hot white dwarf, the extreme ultraviolet radiation from the star would strip away its outer layers and some of this stripped gas would swirl into a disc, itself accreting onto the white dwarf. This is what scientists think they are seeing around WDJ0914+1914: the first evaporating planet orbiting a white dwarf.

Combining observational data with theoretical models, the team of astronomers from the UK, Chile and Germany were able to paint a clearer image of this unique system. The white dwarf is small and, at a blistering 28 000 degrees Celsius (five times the Sun’s temperature), extremely hot. By contrast, the planet is icy and large—at least twice as large as the star. Since it orbits the hot white dwarf at close range, making its way around it in just 10 days, the high-energy photons from the star are gradually blowing away the planet’s atmosphere. Most of the gas escapes, but some is pulled into a disc swirling into the star at a rate of 3000 tonnes per second. It is this disc that makes the otherwise hidden Neptune-like planet visible.

“This is the first time we can measure the amounts of gases like oxygen and sulphur in the disc, which provides clues to the composition of exoplanet atmospheres,” says Odette Toloza from the University of Warwick, who developed a model for the disc of gas surrounding the white dwarf.

“The discovery also opens up a new window into the final fate of planetary systems,” adds Gänsicke.

Stars like our Sun burn hydrogen in their cores for most of their lives. Once they run out of this fuel, they puff up into red giants, becoming hundreds of times larger and engulfing nearby planets. In the case of the Solar System, this will include Mercury, Venus, and even Earth, which will all be consumed by the red-giant Sun in about 5 billion years. Eventually, Sun-like stars lose their outer layers, leaving behind only a burnt-out core, a white dwarf. Such stellar remnants can still host planets, and many of these star systems are thought to exist in our galaxy. However, until now, scientists had never found evidence of a surviving giant planet around a white dwarf. The detection of an exoplanet in orbit around WDJ0914+1914, located about 1500 light years away in the constellation of Cancer, may be the first of many orbiting such stars.

According to the researchers, the exoplanet now found with the help of ESO’s X-shooter orbits the white dwarf at a distance of only 10 million kilometres, or 15 times the solar radius, which would have been deep inside the red giant. The unusual position of the planet implies that at some point after the host star became a white dwarf, the planet moved closer to it. The astronomers believe that this new orbit could be the result of gravitational interactions with other planets in the system, meaning that more than one planet may have survived its host star‘s violent transition.

“Until recently, very few astronomers paused to ponder the fate of planets orbiting dying stars. This discovery of a planet orbiting closely around a burnt-out stellar core forcefully demonstrates that the Universe is time and again challenging our minds to step beyond our established ideas,” concludes Gänsicke.

This research was presented in a paper to appear in Nature.