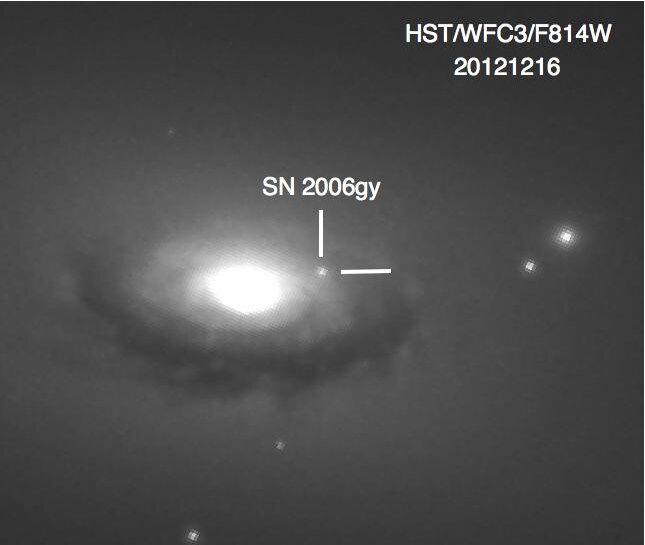 Superluminous supernovae are the most luminous explosions in the cosmos. SN 2006gy is one of the most studied such events, but researchers have been uncertain about its origin. Astrophysicists at Stockholm University have, together with Japanese colleagues, now discovered large amounts of iron in the supernova through spectral lines that have never previously been seen either in supernovae or in other astrophysical objects. That has led to a new explanation for how the supernova arose.

“No-one had tested to compare spectra from neutral iron, i.e. iron in which all electrons are retained, with the unidentified emission lines in SN 2006gy, because iron is normally ionized (one or more electrons removed). We tried it and saw with excitement how line after line lined up just as in the observed spectrum,” says Anders Jerkstrand, Department of Astronomy, Stockholm University.

“It became even more exciting when it quickly turned out that very large amounts of iron were needed to make the lines—at least a third of the Sun’s mass—which directly ruled out some old scenarios and instead revealed a new one.”

The progenitor to SN 2006gy was, according to the new model, a double star consisting of a white dwarf of the same size as the Earth and a hydrogen-rich massive star as large as our solar system in close orbit. As the hydrogen rich star expanded its envelope, which happens when new fuel is ignited in the late stages of evolution, the white dwarf was caught in the envelope and spiralled in towards the centre of the companion. When it reached the centre the unstable white dwarf exploded and a so-called Type Ia supernova was born. This supernova then collided with the ejected envelope, which is flung out during the inspiral, and this gigantic collision gave rise to the light of SN 2006gy.

“That a Type Ia supernova appears to be behind SN 2006gy turns upside down what most researchers have believed,” says Anders Jerkstrand.

“That a white dwarf can be in close orbit with a massive hydrogen-rich star, and quickly explode upon falling to the centre, gives important new information for the theory of double star evolution and the conditions necessary for a white dwarf to explode.”

Shining a new light on the evolution of supernovae

Citation:
New insights about the brightest explosions in the Universe (2020, January 23)
retrieved 23 January 2020
from https://phys.org/news/2020-01-insights-brightest-explosions-universe.html