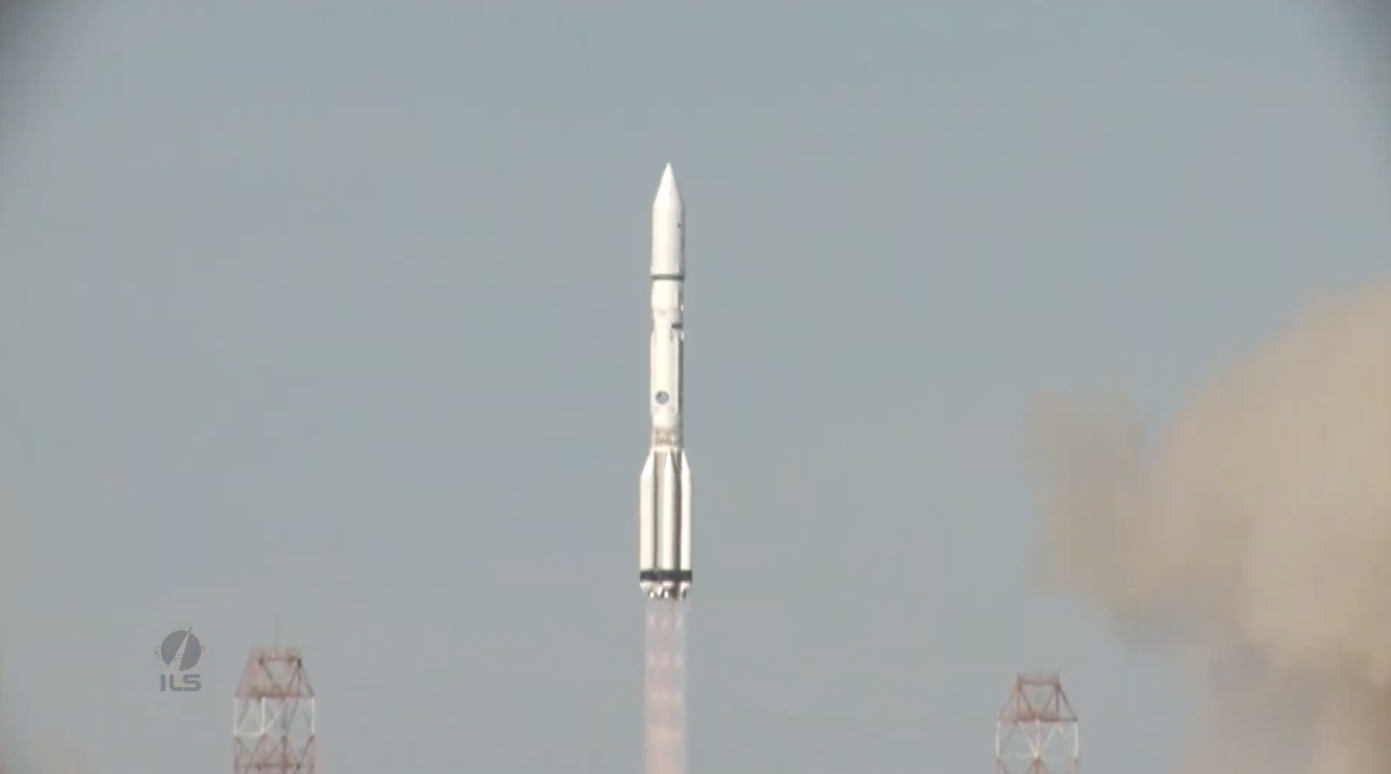 Proton lifted off at 6:18 a.m. Eastern from Russia’s Baikonur Cosmodrome in Kazakhstan. Its two passengers are scheduled to separate from the rocket almost 16 hours later in a supersynchronous transfer orbit.

The launch is ILS’ first of the year, and while Russia has launched multiple spacecraft on the same Proton before, it is the company’s first dual launch carrying two commercial satellites. Both spacecraft were built by Northrop Grumman — the Mission Extension Vehicle-1 for its subsidiary SpaceLogistics, and Eutelsat 5 West B for French operator Eutelsat Communications.

The start of commercial satellite servicing

Northrop Grumman has a contract with Intelsat to extend the life of Intelsat-901, an 18-year-old satellite, for five years.

The 2,330-kilogram MEV-1 will take up to three and a half months to reach geostationary orbit using its electric propulsion, Joe Anderson, SpaceLogistics’ vice president of operations and business development, said Oct. 1 during a Consortium for Execution of Rendezvous and Servicing Operations event. Once connected to Intelsat-901 in an inclined geosynchronous orbit, the combined stack will move a few hundred kilometers higher into a graveyard orbit above most operational satellites, for testing.

Preparations and testing will take a few months to complete before Intelsat-901 is placed back into the GEO arc, Intelsat CEO Stephen Spengler said Oct. 8 at the Satellite Innovation Conference here.

Spengler said Intelsat sees value in keeping satellites running beyond their typical 15-year design life when they are continuing to generate revenue without issue.

“If those customers are happy with what we’re doing on the current generation and don’t need to move to high-throughput capabilities immediately, it’s an opportunity to extend them,” he said.

Keeping old satellites operational through life extension has another benefit too, he said. “It allows us to delay our [capital expenditures], save our capex as technology advances, and spend that capex on the latest version of technology as it comes along.”

Eutelsat-5 West B is a replacement satellite for the 17-year-old Eutelsat-5 West A satellite. The new 2,860-kilogram satellite uses a Northrop Grumman GEOStar-2 platform with an all Ku-band payload from Airbus Defence and Space.

Eutelsat-5 West B will enable service continuity for television broadcasting in Europe and North Africa, namely in France, Italy and Algeria. It also carries a hosted payload for the European GNSS Agency called GEO-3. The hosted payload will hone the accuracy of satellite navigation signals over Europe for use in aviation, maritime and other industries as part of the European Geostationary Navigation Overlay System.

ILS’s mission was originally planned for Sept. 30, but was delayed due to an issue identified during electrical testing of the rocket’s upper stage control system.

Kirk Pysher, president of ILS, said the issue was tracked to “nuances” unique to the stacked payload configuration that were later found to be harmless.

“Using the test stand in Moscow, [Khrunichev] specialists were able to simulate the specific spacecraft stack nuances and adjust the testing procedure accordingly to account for those nuances,” Pysher said by email. “No changes were required to flight hardware or software.”

Pysher, during the launch webcast, said Khrunichev continues to reinforce quality improvement initiatives to ensure Proton flies without issue. The rocket has launched with 17 consecutive successes since its last failure in 2015.

The MEV-1 and Eutelsat 5 West B launch was ILS’s first and only mission for this year. Russia has launched three other Protons this year — one for Gazprom Space Systems’ Yamal-601 communications satellite in May, one of the Spektr-RG telescope in July, and one of a Russian military satellite in August. In June Proton-builder Khrunichev said up to six Proton rockets could launch this year.