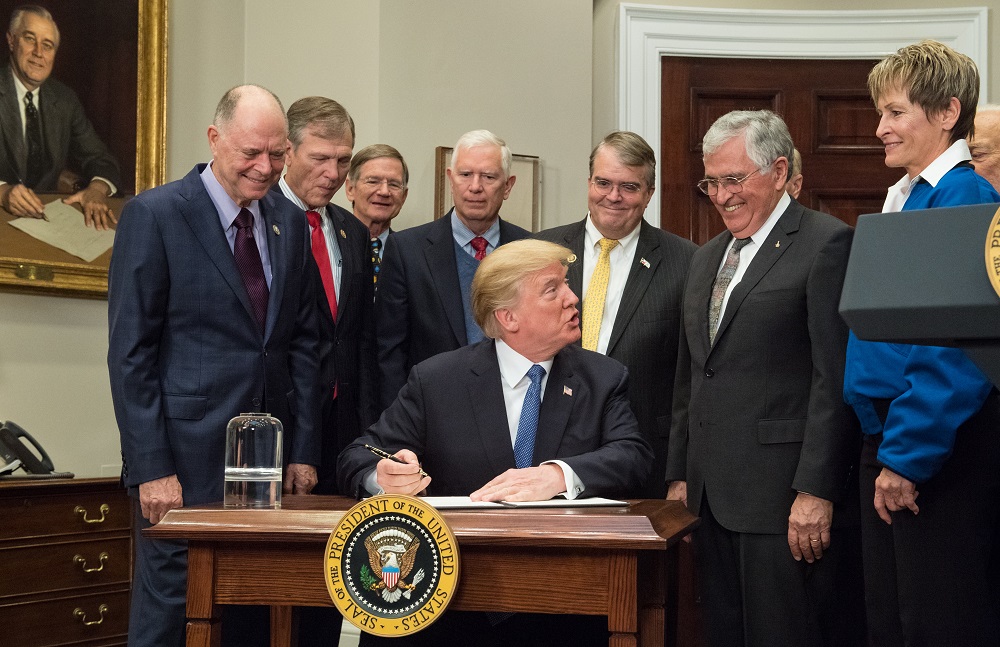 WASHINGTON — President Donald Trump disrupted months of civil space policy development in a single tweet June 7, suggesting that NASA should not return humans to the Moon.

“For all of the money we are spending, NASA should NOT be talking about going to the Moon – We did that 50 years ago,” he wrote. “They should be focused on the much bigger things we are doing, including Mars (of which the Moon is a part), Defense and Science!”

For all of the money we are spending, NASA should NOT be talking about going to the Moon – We did that 50 years ago. They should be focused on the much bigger things we are doing, including Mars (of which the Moon is a part), Defense and Science!

Trump’s tweet came shortly after a segment on the television network Fox Business where Jeff DeWit, NASA’s chief financial officer, was interviewed by host Neil Cavuto shortly after the agency rolled out its low Earth orbit commercialization plans. That included a discussion of the policy, announced by Vice President Mike Pence in March, to land humans on the mon within five years.

Actually, Trump’s “Mars (of which the Moon is a part)” line is probably referring to the NASA flack’s point that going to the moon would help us get to Mars later on. pic.twitter.com/z4wmL6ZKmb

“I thought we would advance beyond that,” Cavuto says. “I thought either we would target Mars or… Why this? Why now?” The comment was first noted by Media Matters for America, a media watchdog group.

“What we’re doing now is enabling a sustainable presence on the lunar surface,” DeWit responded. “We still need to drive that innovation and complete those technologies that will allow us to have a sustained presence on Mars.”

It also came a day after CNN published an interview with Apollo 11 astronaut Michael Collins, who has previously argued that NASA should go to Mars rather than return to the moon. Collins, in that interview, was critical of Trump. “I don’t think he’s too much aware of Mars,” Collins said. “Maybe he doesn’t understand that there is a planet Mars.”

Regardless of the source, Trump’s tweet took the space community by surprise. There was no indication prior to that tweet that the White House was reconsidering the goal of returning humans to the moon by 2024, or at all. A human lunar return has been national policy since President Trump signed Space Policy Directive 1 in December 2017.

Neither NASA nor the White House immediately responded to requests for comment about Trump’s tweet and the status of NASA’s lunar plans.

Earlier in the day, NASA Administrator Jim Bridenstine spoke at the National Space Society’s International Space Development Conference in Arlington, Virginia, where he reiterated the agency was working to land humans on the moon by 2024.